Saskatoon moves ahead on Indigenous engagement and inclusion 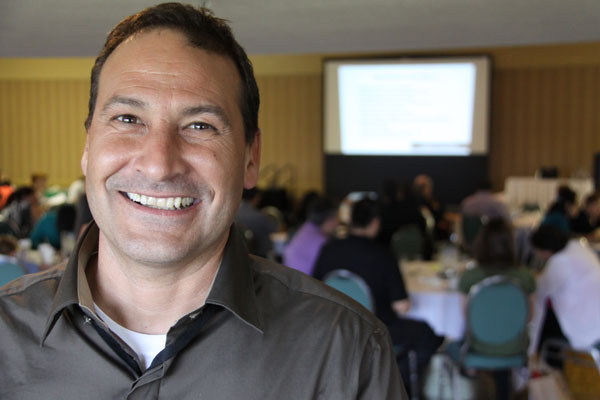 Gilles Dorval, City of Saskatoon’s director of Aboriginal relations, says the city is moving forward on Indigenous engagement and inclusion but there is always room for improvement, such as Aboriginal employment.

The City of Saskatoon is moving ahead with plans to improve Aboriginal engagement and inclusion.

Kitaskinaw, which means “our land” in Plains Cree, is a collaborative project between the city, Saskatoon Tribal Council, United Way and Gabriel Dumont Institute.

The goal of the project is to better understand Saskatoon’s Aboriginal community in relation to programs and services.

The Gathering was organized by the city, STC and the Central Urban Métis Federation Incorporated and took place in June 2014 with about 132 people in attendance.

Its goal was to seek input from the Aboriginal community, within an open forum, on how programs and services can be improved in the future.

Recommendations from both the Kitaskinaw Project and Gathering comprise six areas including cultural and anti-racism education, Aboriginal employment, participation in sports, culture and recreation programs, inclusion of Aboriginal people, culture and history, transportation and attainable housing.

The city has set a goal of having a 14 per cent Indigenous workforce.

The Kitaskinaw report notes that as of July of this year, close to nine per cent of the city’s workforce self identifies as Aboriginal, which is an increase of 1.2 per cent since 2014.

In terms of sports, culture and recreation programs, the goal is to make such programs either free or low-cost for low and low-middle income citizens and include accessibility for Indigenous seniors.

Recommendations include partnering with STC and the Saskatoon YMCA to determine how best to leverage resources to improve accessibility to community recreational facilities and potentially collaborate on a new joint-use city centre recreation facility.

One recommendation to enhance the inclusion of Aboriginal culture and history is to increase the number of city streets, subdivisions and parks named in recognition of Indigenous peoples’ and their contribution to the Saskatoon. 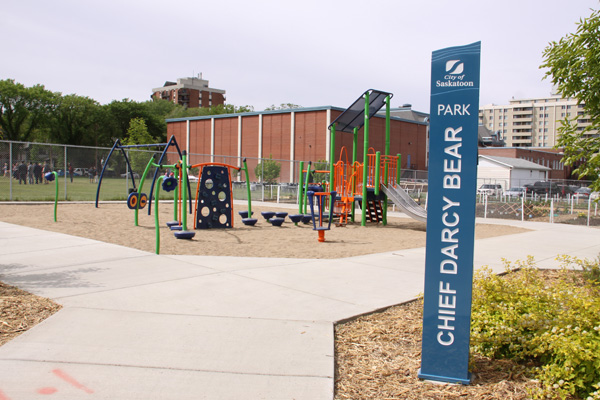 As per one of the recommendations that public spaces be named in recognition of Indigenous people and their contributions, this park was named after Whitecap Chief Darcy Bear.

Other recommendations include seeking further input from Indigenous people on how to improve Saskatoon transit and addressing the housing needs of Aboriginal people living in the core communities.

Gilles Dorval is the City of Saskatoon’s director of Aboriginal relations.

He says the city is moving forward on Indigenous engagement and inclusion but there is always room for improvement.

Aboriginal employment is one such area.

“The bulk of people we are hiring is in the seasonal labour positions because of the different education levels,” he says. “So we’re trying to work on training, pre-employment partnerships – with SIIT, heavy equipment operators, in the building custodian area. So sometimes we are able to put lots of effort and get one person in a higher level position, like in a professional or technical position.”

He adds the reason the city is pouring so many resources into improving Aboriginal engagement and inclusion is for both moral and economic reasons.

“They (reports) all talk about the cost of not doing business with the Aboriginal community. We don’t have the luxury of waiting anymore. If we’re going to be a world class city as far as providing a good place to work, live and play, then we need to make sure that we’re inclusive of the Aboriginal community in economic development, in providing services – our Aboriginal citizens need to be feeling as comfortable as everybody else in our community.”

Recent Indigenous engagement and inclusion initiatives include a $150,000 grant to the upcoming World Indigenous Business Forum, the naming of Chief Darcy Bear Park and a $17,000 contribution to a CUMFI project for an affordable elder’s residence within a residential care home.

The city, United Way, Aboriginal Friendship Centres of Saskatchewan, Saskatoon Health Region and other organizations will also be hosting the Mawe Wicihitowin - “Working Together” - conference to build on local Aboriginal engagement in service delivery.