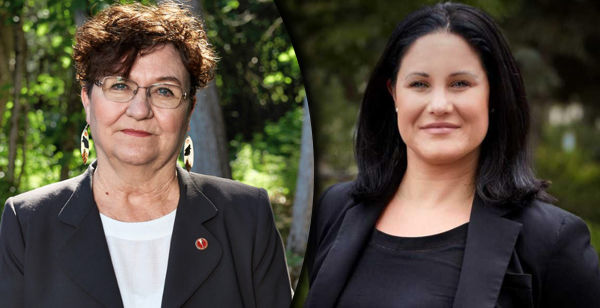 Yvonne Boyer was a former nurse, a lawyer and the Canada Research chair in Aboriginal health and wellness at Brandon University in 2015 when she received a call that would shake public consciousness and lead her to becoming a leading voice in the fight for Indigenous women’s reproductive rights.

“Those names are very, very important, because they were the first warrior women that came forward and they paid dearly… They were the brunt of a monstrosity and white backlash against Indigenous women.”

The Saskatoon Health Region (SHR) had quickly changed its policy on tubal ligations, requiring women to discuss the matter with their doctors during pregnancy, prior to going into labour.

But when the coerced sterilizations became a national news story, the SHR reached out to Boyer, asking her to conduct an external review of their tubal ligation policies and practices. She gives recognition to them for taking action.

“They could have waited for the lawsuits to come. They didn’t have to do this… I really believe that they had good intent in trying to get to the bottom of it,” she said.

Boyer agreed to do it on the conditions that she have a partner work with her on their own terms and that the results be published. She chose Métis Dr. Judy Bartlett and Elder Mary Lee, who worked with her when women started to anonymously come forward and tell them their stories in a Saskatoon hotel.

The women would talk about their experience, “which was so traumatic it’s hard to even put words to it,” Boyer said.

“The trauma was not just the act of cutting the fallopian tubes. The trauma came from an ancestral cut. An ancestral cut of ties because of the inability to give birth. That was taken away.”

In 2017, they published the External Review report detailing the, “intimidation, harassment, psychological pressure and coercion,” experienced by survivors from SHR facilities.

Survivors of the trauma turned to the courts.

Lawyer Alisa Lombard said she wasn’t really aware of the issue until she was contacted by a woman who shared her coerced sterilization story.

“I was just really troubled, and was hoping that she was the only one. Unfortunately, she wasn’t.”

As more women came forward with their stories, Lombard of Semaganis Worme Lombard law firm filed a class-action suit at the Court of Queen’s Bench in Saskatchewan. Soon after, in 2019, they filed another in Manitoba. Currently, they have over 100 clients across the country.

The class-actions are claiming the cost of future care: monies would allow survivors to access what they need to heal, Lombard said.

She believes the short-term outcome is a measure of punishment, informing women of their bodily autonomy and integrity rights and holding the individuals and institutions responsible to account.

Suggestions of providing more midwives and access to doulas to First Nation’s communities, are great but are missing the point, she said.

“We have the right to go to the hospital, deliver a baby with an epidural and not walk out sterile against our will,” she said.

Boyer was appointed to the Senate of Canada in 2018, where she devoted her first speech to Indigenous women’s health, including the need to address coerced sterilization.

She says something like in vitro fertilization (IVF) should be available to survivors who still want to have children.

She remembers checking into a hotel, and the female desk clerk recognizing her as the “Senator of Sterilization.”

“Tears welled up in her eyes and she started to cry and she said, ‘They did it to me. I was 21 and I had four kids. And they sterilized me against my will. And now I'm 35 and my kids have grown and I want more. And I can't. And I can't afford IVF,’” Boyer recalled.

“This is happening everywhere. This is not just located in Saskatchewan in the Saskatoon Health Region. It’s located where there is a high population of Indigenous people. And I know that,” she said.

Since the External Review, Boyer has traveled across the country to speak about the issue. She receives calls from all over Canada and listens to survivors’ stories. Currently, she has a motion in the Senate calling for the Standing Committee on Human Rights, of which she is a member, to study coerced and forced sterilization of Indigenous women. If it goes ahead, she hopes to hve the report made public.

Like Boyer, Lombard thinks much still needs to change systemically.

“At the end of the day, you’re in this extremely vulnerable state, in a place where you ought to be the safest in that state, and it’s totally the opposite experience for many women, for our clients. We’re not saying it’s the same experience for everybody and no one is saying all doctors do this, but that’s not the point. Some do. And those are the ones that were concerned with,” said Lombard.

“Hearing these stories is very troubling, and it certainly makes you wonder how safe you are and how safe your children are - I have two girls - in this institution of health that is supposed to provide equal access and accessibility. And there isn't. There just isn't.”