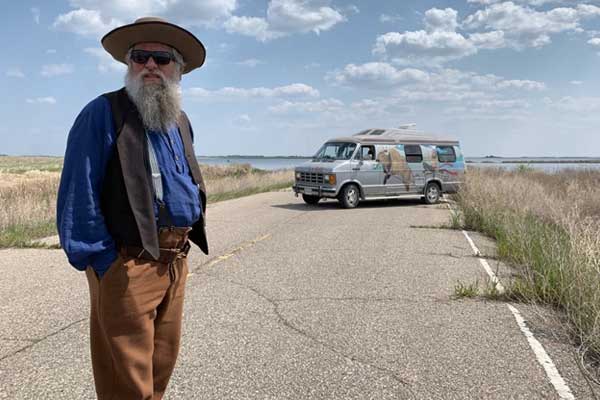 Trevor Cameron is the writer and executive director of Shadow of Dumont with the van “Le Petit”.

To celebrate Metis culture, an online screening of the comedic documentary Shadow of Dumont took place on July 30th at 5:30 p.m.with a pre-show performance of Metis talents and a Q & A with filmmaker and great-great-nephew of Gabriel Dumont, Trevor Cameron.

To be a part of the online screening go to shadowofdumont.com and sign up for their mailing list to receive a link to join the event. The documentary is also available on CityTV in Saskatchewan.

Cameron is the writer and one of the executive directors of Shadow of Dumont, his first feature length documentary. He has also worked as a writer/director with APTN on the shows Wapose Bay and Rabbit Falls.

In a van painted with buffalo named “Le Petit” after Gabriel Dumont's rifle and Cameron dressed as Gabriel Dumont, the team embarked on a journey that took them across the prairies and to North Dakota, Wyoming, Montana, and New York.

“I thought, what if I jumped in a van and drove around and just looked for his stories,” said Cameron. “Half road trip, half documentary. I tried to hit as many places as I could that had a connection to him and I made sure I painted the van to reflect who I was and what I was doing.”

While shooting the film Cameron explored how Gabriel Dumont is valued and celebrated for different accomplishments depending on the area. In Saskatchewan, Cameron found he was a hero for Aboriginal rights and in Manitoba or Quebec he fought for language rights.

The documentary is a fun adventure that discovers Cameron’s Metis roots while exploring Gabriel Dumont’s history and realizing how history affects us today. The team even discovered some of Gabriel Dumont’s items that are still around today.

“When you think about how far history is, really it’s not that far,” he said.