Many people are mourning the loss of a respected, well known elder in Saskatchewan. Noel Starblanket, 72, passed away in the early morning of April 15, 2019 due to complications of diabetes. 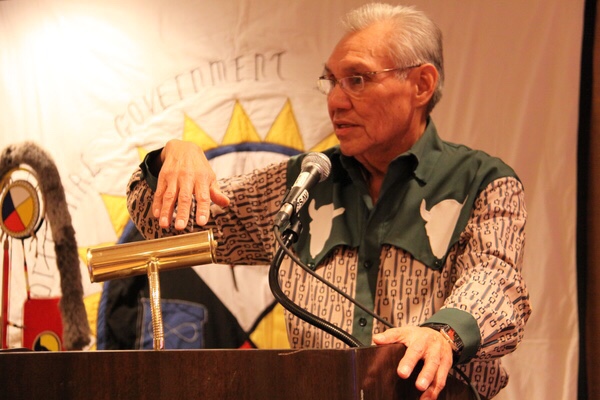 Starblanket, a residential school survivor, from the Star Blanket First Nation was a man with many accomplishments.

He started his work as a leader at a young age and became Chief of Star Blanket Cree Nation in 1971 at the age of 24, making him the youngest Chief in the country at the time. He served on the board of what was then called the Federation of Saskatchewan Indian Nations (now the Federation of Sovereign Indigenous Nations) and served as leader for two terms of the National Indian Brotherhood, now known as the Assembly of First Nations, from 1976 - 1980. Later in life, Starblanket dedicated his time to providing spiritual guidance, teachings, advice and insight as the Elder-in-Residence at Scott Collegiate in Regina, with the Regina public school board and the University of Regina’s Office of Indigenization. He helped set the foundation for the eventual repatriation of the Constitution in 1982.

U of R staff and students mourn the loss of a monumental leader.

“We at the Aboriginal Student Centre at the University of Regina are incredibly saddened by the loss of Life Speaker, Noel Starblanket,” according to an ASC statement. “We are forever grateful for the wealth of knowledge and experiences he so graciously provided us through his time with us. We are especially grateful for all the work he has done to support and guide our students here at the U of R. Noel loved all the students as much as they loved him and we know that we’re all better for having known him.”

The current Star Blanket First Nation Chief Michael Starr said the beloved leader was an outstanding, respectful person who was well-known and respected throughout the country.

“He was a tremendously strong Treaty advocate, a believer in his people and gifted in our ancestral ways,” said Star Blanket First Nation Chief Michael Starr. “He motivated our youth to believe in themselves, to get a sound education and to pursue sport, culture, language and fine arts. Our nation is mourning the loss of a great leader and we will miss him deeply.”

“We want to acknowledge his many decades of tireless work on our Inherent and Treaty Rights. He had a long list of accomplishments at the First Nation, Tribal Council, FSIN and National level, with the National Indian Brotherhood and Assembly of First Nations,” said FSIN Chief Bobby Cameron in a media release. “The way he conducted himself in ceremony was rooted in culture and tradition; this is something one would have to see to experience. We will remember him for in the way he would sing our songs and the way he could always make people laugh through stories. For all of us, he was a compassionate and respectful friend. He will be greatly missed.”

“Noel Starblanket [was] a strong and outspoken leader and Knowledge Keeper who dedicated his life to ensuring First Nations people and First Nations rights are honoured and respected,” said AFN National Chief Bellegarde. “Noel was a major and influential figure in Saskatchewan and across the country. So many young people of my generation learned from him through his example of hard work and his accomplishments both as a leader and a Knowledge Keeper. He was already a Chief of Star Blanket Cree Nation in his early 20s and continued throughout his life to set a positive example of strong leadership in a way that builds bridges among people and communities. This is a profound loss for all of us, but his spirit, his teachings and his leadership will always guide us.”

A traditional wake will be held for Starblanket at White Buffalo Calf gym in Lebret on April 18th starting at 4pm. The funeral services will be held on April 19 at 11am in Star Blanket First Nation.