Stories are in our bones 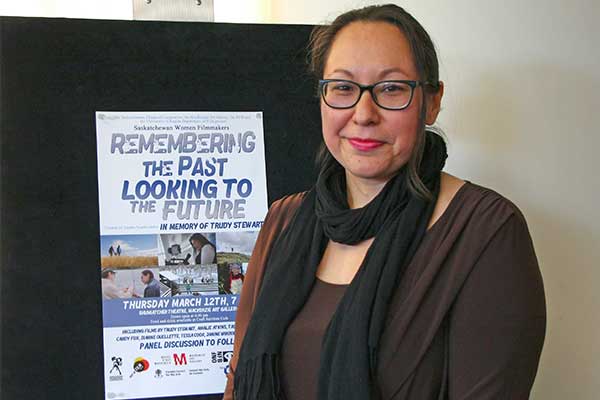 Janine Windolph’s short film Stories Are in Our Bones was shown as part of “Remembering the past/Looking to the future,” a celebration of Saskatchewan’s women filmmakers in memory of Trudy Stewart. Photo by Julia Peterson

The idea for Janine Windolph’s latest film came from her sons – they wanted to learn how to fish.

“[I had] the realization that I had to make a stronger effort to connect them to their northern roots in La Ronge, and with my family who are still actively living on the land,” Windolph said.

Windolph decided to take her city-raised boys up to La Ronge and film their kokum teaching them how to fish. This was the genesis of Stories Are in Our Bones, a short film produced by the National Film Board as part of its Wide Awake program.

It had its Canadian premiere at the MacKenzie Art Gallery last week, as part of “Remembering the past/Looking to the future,” a celebration of Saskatchewan’s women filmmakers held in memory of the late filmmaker Trudy Stewart.

“I’m very excited to be able to screen [Stories Are in Our Bones] at the MacKenzie Art Gallery,” Windolph said. “I used to work here … so it has many layers of resonance in terms of good vibes. I just want my boys to feel supported on their journey, and to be able to share the film with everybody is the most important part.”

Windolph has fond memories of working on the film, including watching her sons learning to blow through grass.

“It was more of a lighthearted moment,” she said. “It was in the midst of what you don’t see, which is the hours and hours of not catching a fish, when my boys needed a little bit of a breather. In that moment, I really liked how they were able to change their mood, and mastering the grass gave them the motivation to finish what they started.”

For Windolph’s son Dawlari, 15, participating in the short film was a good experience.

“It’s just like hanging out with family – with a few extra steps added – so it was really fun to share that,” he said.

Looking forward, Windolph wants to extend the work she has begun with Stories Are in Our Bones and do more projects centered around teaching her boys how to stay connected to nature and live sustainable lives.

“I’m hoping my next [film] will be actually taking my boys in a bush plane, taking them to an island to learn trapping,” she said. “I would love for them to take that next step in their journey towards becoming providers.”

Stories Are in Our Bones is currently available to watch on the NFB website.