STR8 UP continues its evolution by staying the same 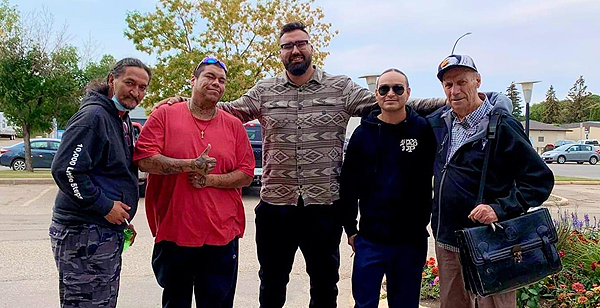 For the last 20 years, STR8 UP has helped people who are incarcerated, who have been recently released, or are dealing with addiction. Photo by R. Misskey

Over the summer, the Federal Re-integration project was launched, which means STR8 UP will be able to offer support to those currently incarcerated at federal facilities throughout the province.

STR8 UP Executive Director Russ Misskey said it is in keeping with STR8 UP’s mission and that is to help individuals successfully leave gangs.

Since its inception, the gang-exit strategy program has evolved to meet the needs of its members.

It all started when two inmates asked Father André Poiliévre, the chaplain at Saskatoon Correctional Centre, for help to leave the gang they were in. He promised to try and from there STR8 UP was born. Although he retired, the organization continues to thrive.

It now has partnerships with more than 40 non-profit organizations including: Indigenous communities, government and municipal agencies, educational institutions and businesses. It helped to create the Provincial Gang Strategy and the Gang Violence Reduction Strategy- Community Intervention Model.

Misskey said STR8 UP has expanded to include other services provincially and federally.

In 2020, housing became critical so the STR8 UP Transitional Housing program was created to provide support for people leaving correctional facilities and addictions centres.

The new Federal Re-integration project means STR8 UP Outreach Workers can go into the prisons and develop relationships with individuals by facilitating sharing circles and providing one-on-one support.

“These relationships and (with) us being in the facilities regularly have served to establish a positive reputation among gang members who are contemplating leaving the gang lifestyle,” said Misskey. “Timely contact with gang members in correctional facilities has led to trusting, ongoing relationships.”

He said working towards a common goal with members is what makes STR8 UP unique.

“In custody, inmates have the time and inclination to reflect and assess their plans for the future; most genuinely want to make changes,” said Misskey, “Helping establish viable plans for release on bail or re-integration from custody by facilitating the connections they need, builds an openness to accepting ongoing assistance and case planning. Then once they are released back into the community, they have those established relationships and a community of supports that they are already familiar with to reach out to as they continue their healing journey.”

This helps the person reintegrate and develop a sense of balance in their lives along with a sense of solidarity and kinship so they can seek advice on a regular or daily basis throughout their personal healing journey.

The Community Outreach program is the only program at STR8 UP that doesn’t receive annual funding, so it depends on donations and multiple year-to-year grants to operate.

“This support from the community has over the years allowed STR8 UP to continue to work with individuals looking to leave gangs and has strengthened our network of support,” said Misskey. “For STR8 UP to have been working in the City of Saskatoon for over 20 years now without core funding as an organization is a testament to the amazing work Father Andre started many years ago and to the strength of the organization.”

The hope is to continue building strong partnerships with the various stakeholders and work towards secure, long-term funding.

During its 20 plus years of operation, STR8 UP has supported more than 400 incarcerated people and former gang members to transform themselves into responsible citizens and family members. Although membership is on the rise, STR8 UP still provides access to drug and alcohol counseling, support, sharing circles, and culturally specific programming. Approximately, 95 per cent of STR8 UP’s membership are Indigenous men and women.

One day STR8 UP hopes to become member-led.