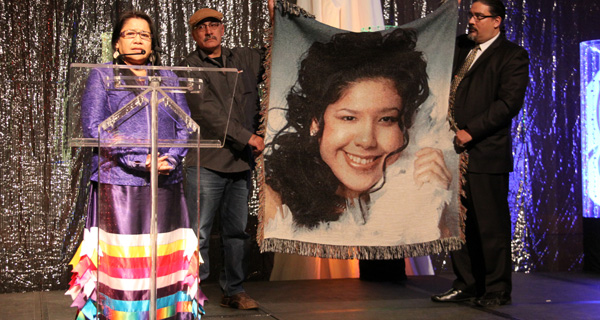 Gwenda Yuzicappi, mother of Amber Redman, was honoured during the Strength of our Women gala.

Touted as the first annual “Strength of our Women” Awards Gala Dinner, emcee Dawn Dumont, with help from Mervin Brass, introduced 52 First Nation women from across the province of all ages and backgrounds. The gala opened with a grand entry of male and female veterans and all the nominees, and prayer from Maria Linklater, along with words from dignitaries and a teaching from Dorothy Myo on the word “Iskwew” and the significance of women as the strength, warmth, protection, and fire of each home.

The evening was hosted by the FSIN Women’s Commission and focused not only on the strength, resiliency, and inspirational role modeling provided by women, but also highlighted the missing and murdered women who have been disappeared, and the families left behind.

“My daughter was a very beautiful young woman,” noted Gwenda Yuzicappi, mother of Amber Redman, adding that she respected morals, elders, and valued family and culture. “Lots of families are still searching. My prayers are with those families still searching...don’t ever give up hope. Our loved ones will come home.” 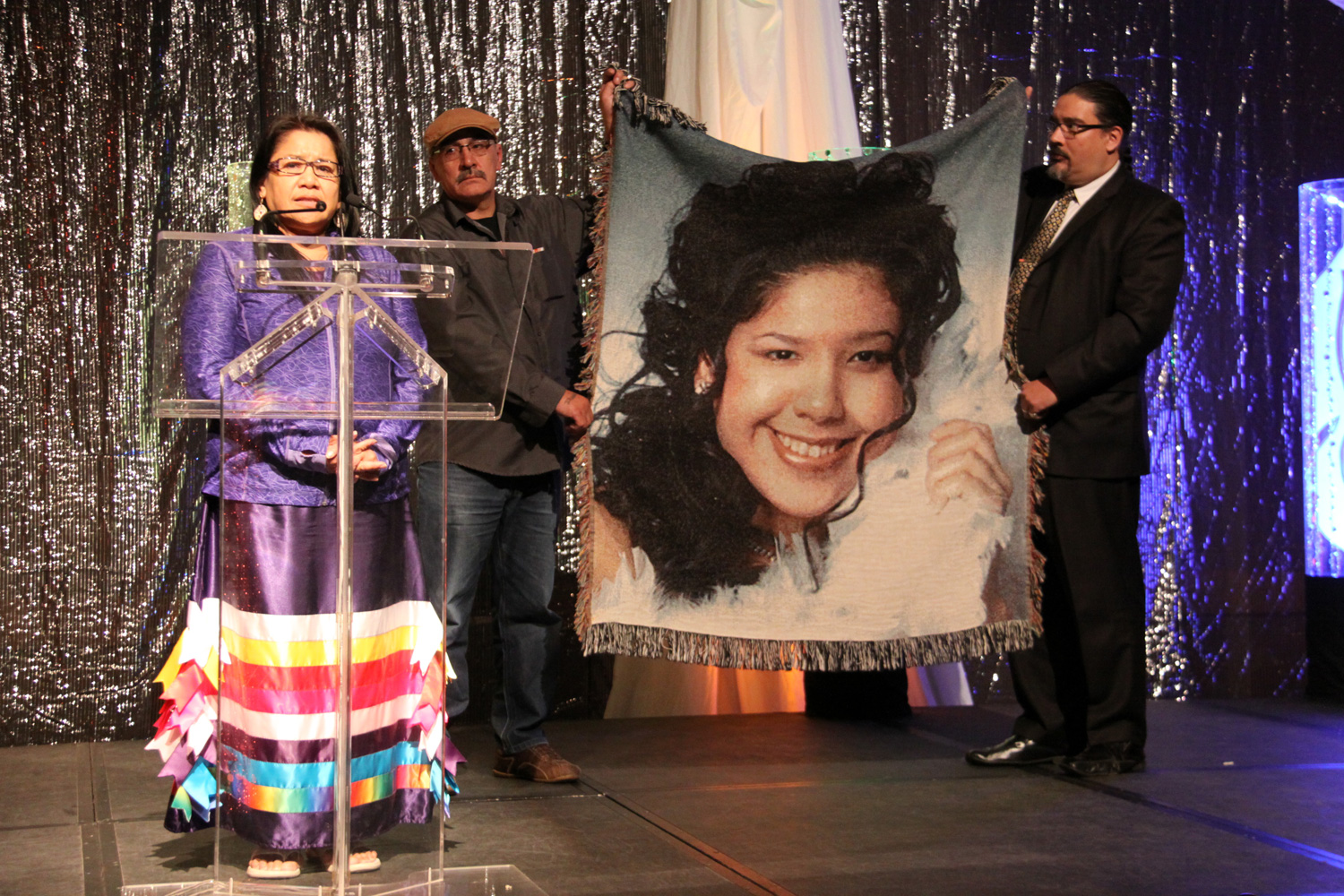 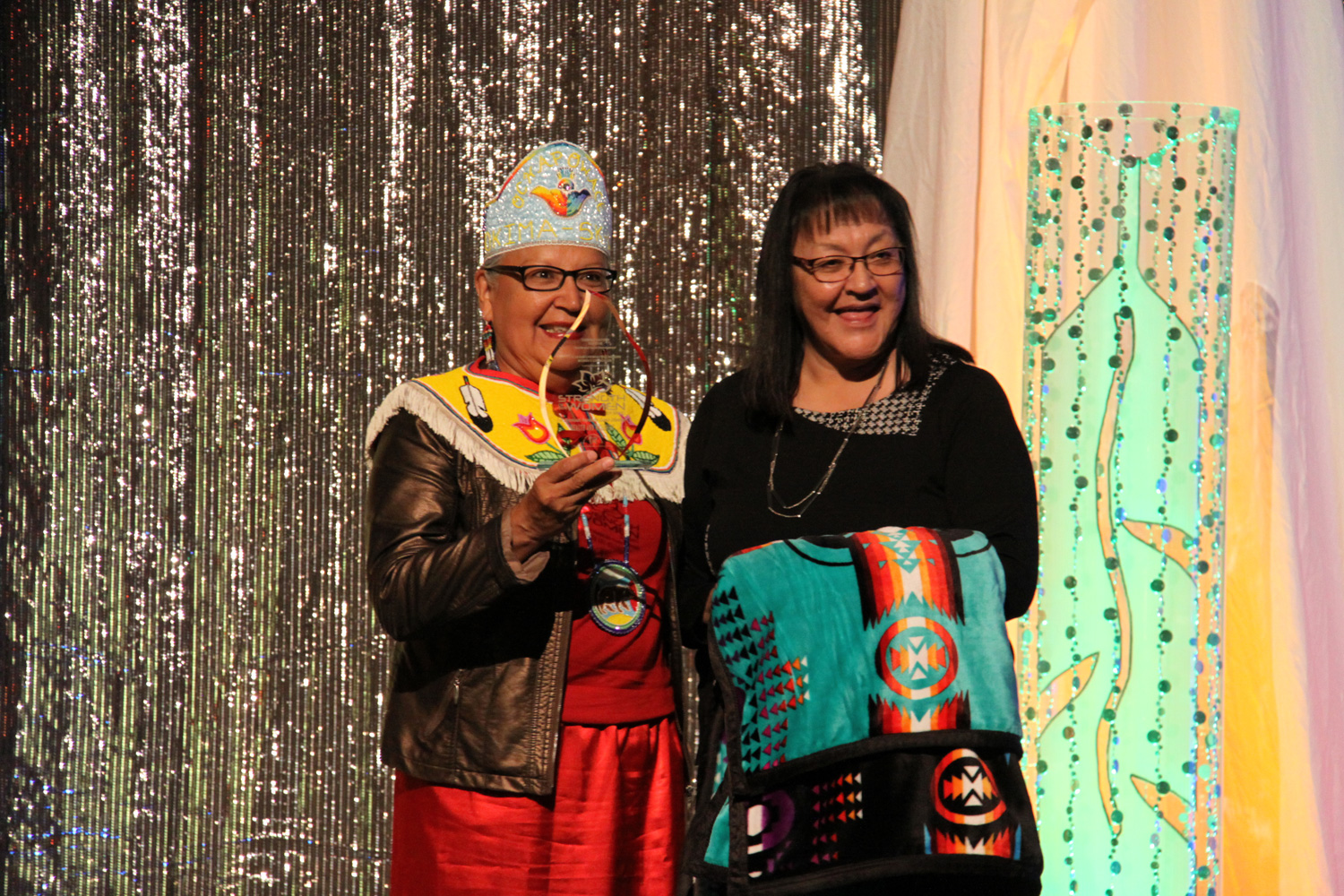 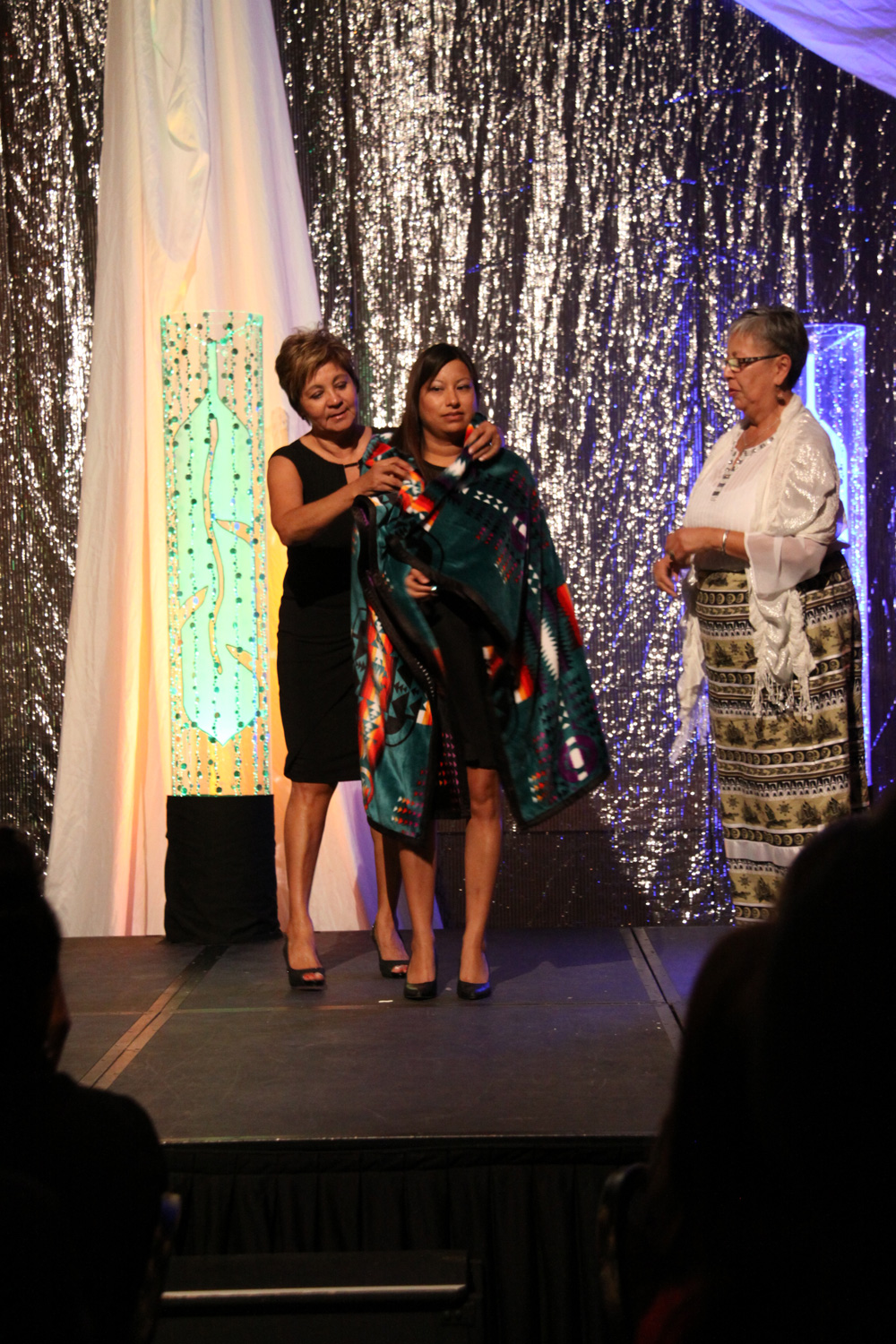 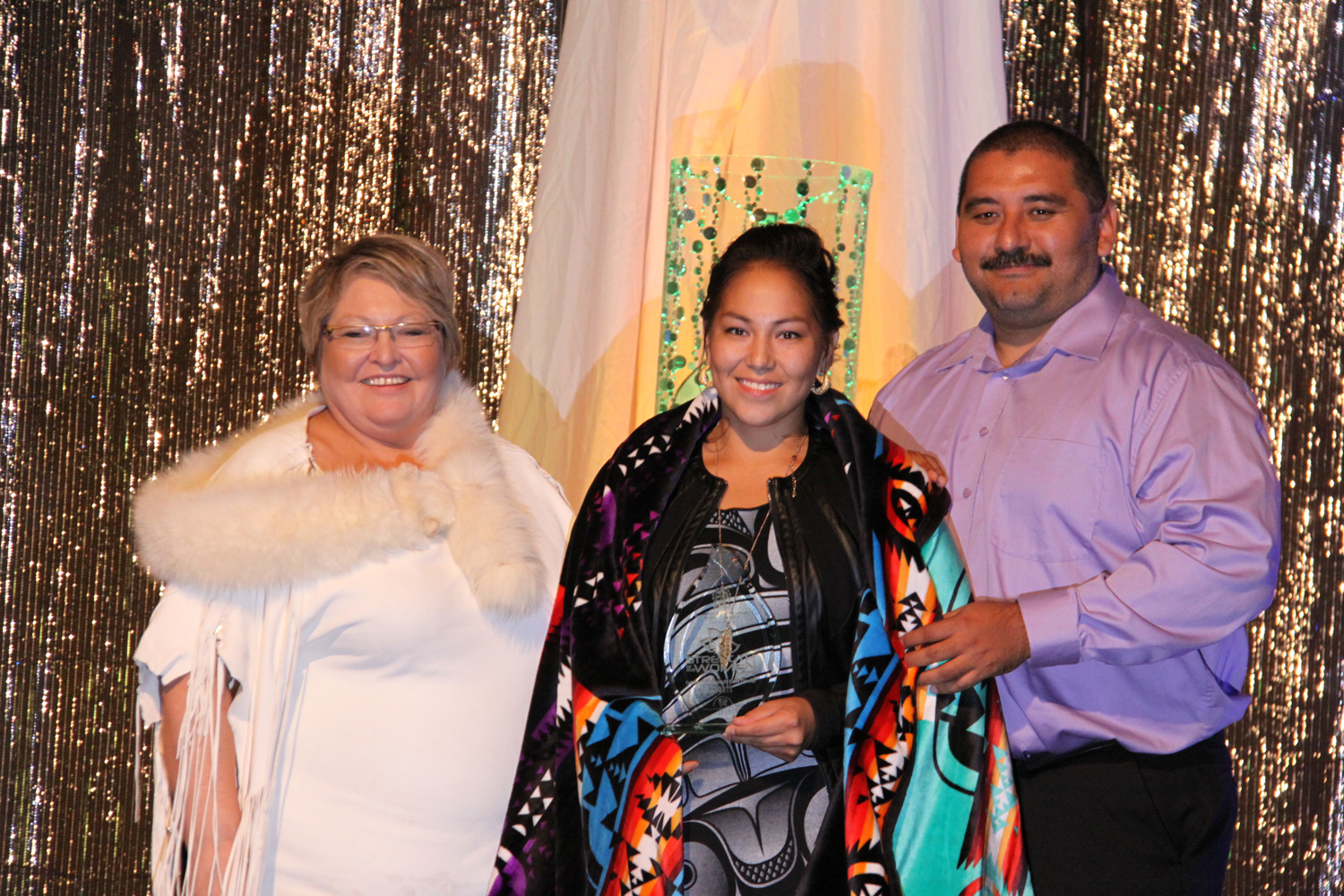 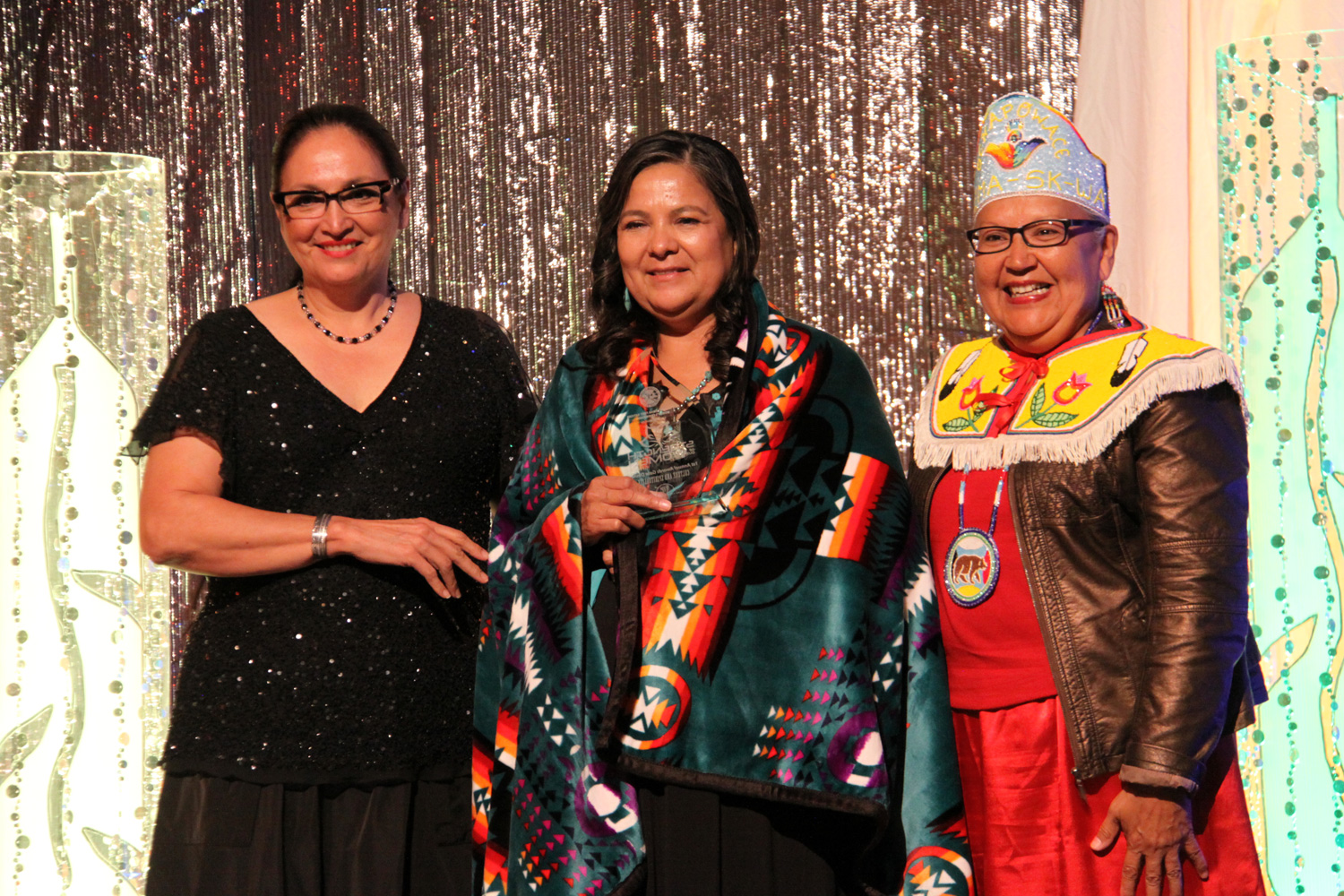 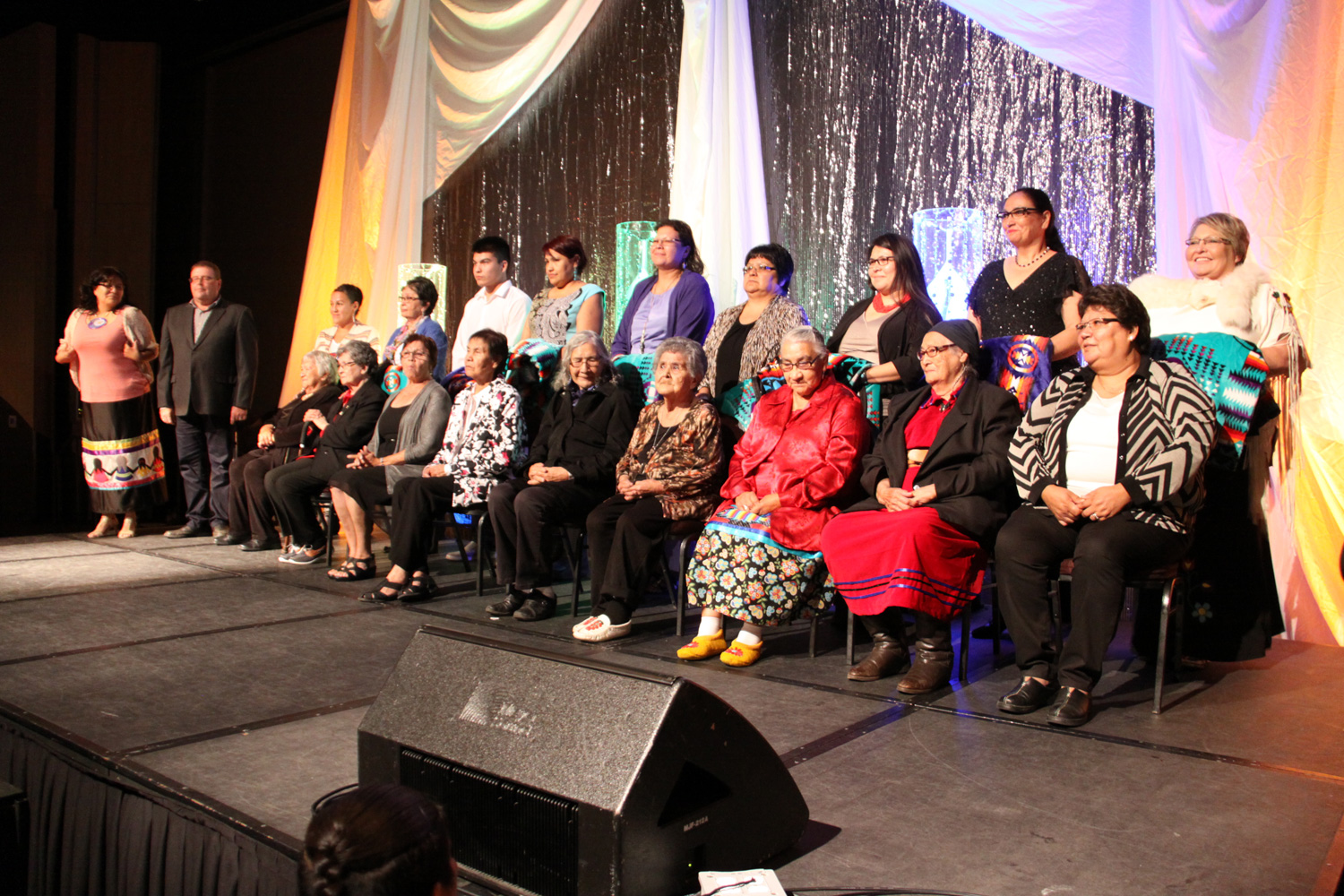 She and Carol Wolfe, mother of Karina Beth Ann Wolfe who has been missing for five years now, were the first to be honoured with blankets and both gave words, Carol using an interpreter and both occasionally wiping away tears as they spoke of their daughters. Amber’s remains were eventually located, but since there is no trace of Karina thus far, Carol keeps up hope that she will return.

“Part of this is about raising awareness for missing murdered Indigenous women and their families because so many families felt unnoticed and unheard,” noted Lynn Acoose, echoing FSIN Interim Chief Kimberley Jonathan’s emphasis on raising funds and awareness for the families of the missing and murdered, while also celebrating the strengths and gifts of women, the heart of families and communities.

Entertainment was provided by various dancers and performers throughout the night, always honouring or showcasing the diverse talents of women.

Shana Pasapa from White Bear First Nation, a martial arts master who advocates for self-defense for women as well as competing very successfully, was the recipient of the Sports Award. Other nominees included Dolores Pahtayken-Iron, Cindy Desnomie, and Tara Griffith.

Karen Rabbitskin received the Culture & Spirituality award and then spoke for a few moments in both Cree and English about teachings on the gift of life, which were received appreciatively as she shared from her journey. Other nominees included Ashley Waditika, Glenda Abbott, and Valerie Ironchild.

“We are blessed with life force,” observed Rabbitskin, adding that it is important to be thankful, happy, and at peace with our own faults because all the good and bad in life are equally blessings. “My sickness is a blessing, a gift I’ve received. We’re on a journey, we need energies both positive and negative...we were not born for no reason, we have a purpose.”

Speaking from an experience of battling cancer, her words were particularly appropriate on the gala date which is also world suicide awareness and prevention day, something Chief Jonathan also referenced.

Valyncia Sparvier of White Bear First Nation was the recipient of the Youth Award, amidst nominees Leah Prosper, Adrianna Simon, and Teneille Starr.