SUNTEP valedictorians ready to take on the future 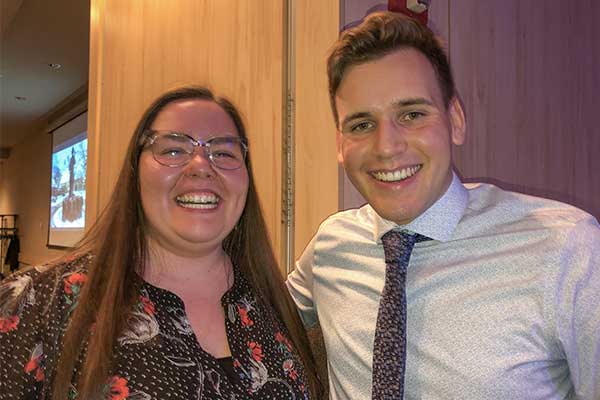 Brittany Macnab and Nathan Gaudet are hopeful for the future. The two recent SUNTEP graduates and co-valedictorians of their 2020 class see the current unsettling times as an opportunity to create change. They are quick to credit the Saskatchewan Urban Native Teacher Education Program (SUNTEP) and each other for the knowledge and inspiration that propels them forward.

“Brittany is extremely knowledgeable and passionate. She has such a big heart and would give the shirt off her back to help others. Indigenous matters are very important to her and in the classroom its very recognizable. She’s a force to be reckoned with,” said Gaudet.

“Nathan is the most genuinely woke dude I met at university. He’s always there to support people but still have a good time. He’s woke, he knows what’s happening and why it’s happening, and he’s there for the fight,” said Macnab.

Like so many of those this year who were chosen to represent their graduating classes, the two SUNTEP valedictorians were unable to actually make their address to their fellow classmates.

Macnab, from Meadow Lake, said her message was going to be one of memory and optimism.

“My message was a reminder that, hey we’d be a statistic. That we’re the people who will be celebrated by our Métis people because we completed our four-year degree,” said Macnab. “I wanted to remind people how far we’ve come. It’s important to celebrate.”

Gaudet, from Bellevue, planned to share his gratitude for the community SUNTEP created.

“I was going to talk about how grateful I was to have an opportunity to be part of a community that I didn’t know I could be part of. And how grateful I am to SUNTEP for preparing us so well in our teaching careers, and (to my classmates), to not be afraid to impart our Metis culture and heritage in the classroom.”

Macnab and Gaudet have both landed in teaching positions since graduating SUNTEP. MacNab will be teaching Native studies, history, law, and psychology at Carpenter High School in Meadow Lake, which she says is her dream job, and Gaudet will be staying in Saskatoon to teach French Immersion in grade 5-6 class at St Peter’s School.

“I think grade 5-6 is an important age where you can learn a bunch of anti-oppressive education right there in the classroom,” said Gaudet.

“My goal is to have my students think critically about oppressive structures, and then provide them with the tools… to disrupt intersectional oppression.”

With mandatory anti-racist/anti-oppressive classes at SUNTEP, fighting for good seems to be a common sentiment amongst current and former SUNTEP students.

“You begin to understand why people are saying the things they are(...) So I’m pretty confident that everyone who graduated SUNTEP can handle anything that's going on in the world right now,” said Macnab.

“This is exactly what SUNTEP prepared us for. Exactly this. We were prepared to talk about Black Lives Matter before the George Floyd incident,” added Gaudet. “Now I know I will have the support of the community to start changing minds.”