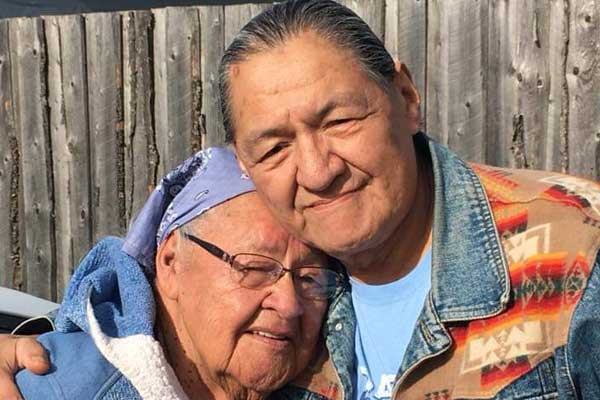 Mother Mary Thunderchild was flown to the west coast every year by her son Wayne who recently passed away from COVID-19. Photo submitted

A man from the Thunderchild First Nation recently passed away from Covid-19 in Seattle, Washington. He was 61.

“He was a self-less, caring and hardworking man,” said Janine Abraham, who is the eldest daughter of Thunderchild.

Although they lived far apart, she said her father always kept in contact with his family through phone calls and video chats.

“It was a lot of phone calls and Facetiming every other day,” said Abraham. “He would always make sure that he called us.”

Thunderchild was married to a woman in Seattle named Jerrilyn Hamley, who also contracted Covid-19. Hamley had to say her final goodbyes to the man she spent the last 25 years together through a phone call. He passed away on the evening of April 4, 2020. When Abraham heard the news of her father’s passing, her heart was shattered.

“The hardest thing was [knowing that] no one was allowed there at the hospital,” she said. “He was alone in the hospital.”

When Thunderchild’s friends in Seattle heard of his passing, they gathered and stood outside of his place with signs to show support and express their condolences to his loving wife as she stared out through her bedroom window.

“It was heartbreaking to hear that she couldn’t even get a hug by family or friends [because] she’s in isolation,” said Abraham.

Thunderchild is remembered as one of the main pillars in his family. Not only through the eyes of his wife and children but his family back home.

Harvey Thunderchild said his brother was a helpful guy and a good-natured man who always had the right words to say to everyone. Growing up, he was a sports enthusiast who loved hockey and baseball. He will be remembered as a great powwow Emcee and someone who never shied away to assist in ceremonies. But mainly, he will be remembered for the love he had for his family.

“Thunderchilds’ are a close-knit family. No matter how far apart we live, we’ve always made that connection as a family,” said Thunderchild. “My brother Wayne always flew my mother to the west coast to go visit him every year. His grandchildren were everything to him too.”

In the eyes of his brother and daughter, Thunderchild was mainly known as a survivor. He had different sicknesses including cancer but had always fought through. When the family first learned he was diagnosed with Covid-19, they had hopes that he would beat it. His passing took everyone by surprise.

“You wouldn’t think [Covid-19] would hit home but it has,” he said. “That’s the hardest part…we weren’t able to be there for him, talk to him or see him. That’s what hurts the most. He was alone.”

The family will cherish the words of their beloved pillar who strongly encouraged everyone to take precaution to the coronavirus even prior to being diagnosed with Covid-19.

“His message was strong. He always said ‘don’t risk it. If you don’t have to be out then don’t’,” said Abraham about her father. “He always thought of the frontline workers. He appreciated the sacrifices they are making for other families.”

A memorial service was held at Thunderchild’s mother’s place in the First Nation community where the family honoured and followed the rules of limiting attendees who wished to pay their respects. Once travel bans are lifted, Abraham and her sisters plan on travelling to Washington to bring half of their father’s ashes home to Thunderchild First Nation where they plan to have a proper burial.

Thunderchild left behind three daughters, numerous grandchildren, his wife, his mother, and eleven siblings amongst numerous friends who will all remember him for the man he truly was and the impact he left in their hearts.