University of Saskatchewan recognizes mature two-spirit student with an award

Editor's note: Page 6 of the May edition, An unexpected prize: Jennifer Lenny wins Indigenous Achievement Award, contained some inaccurate information, which has been corrected. Eagle Feather News regrets the error. 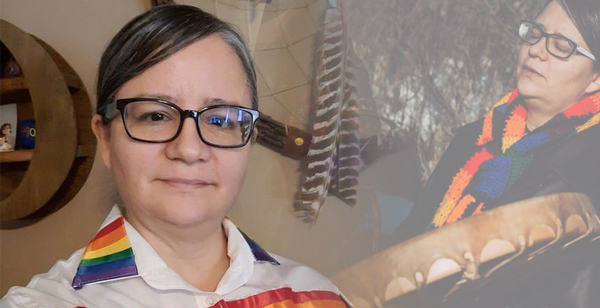 Jennifer Lenny has always marched to the beat of their own drum — and wouldn't have it any other way.

After years of helping to educate others about Indigenous culture, the two-spirit advocate and community leader decided to make it official by pursuing an education degree.

Despite their many achievements, Lenny was still surprised to receive the University of Saskatchewan's Indigenous Student Achievement Award for Community Engagement. The award recognizes a student not only for their academic excellence, leadership, research and community engagement, but also for their resilience.

Lenny, a mature student, completed the first year of the Saskatchewan Urban Native Teacher Education Program (SUNTEP). Although the award was great, the most exciting part thus far has been their 8-year-old daughter's unwavering support.

"Being a role model for her and for her to reflect that back to me affirms that I'm on the right path," said Lenny.

Although it was scary to go to school after so many years in the workforce, like everything else they tackled it head on.

"I need to do it now before I feel that it's too late," said Lenny.

Prior to enrolling, they taught Indigenous studies as a casual instructor at Saskatchewan Polytechnic (Sask Polytech). Lenny also worked at the Indigenous student centre as an Indigenous coordinator and in their spare time advocated for LGBTQ rights through Prince Albert PRIDE and also helped people battling addiction.

"I'm doing things that help my spirit," said Lenny. "I think of myself as a helper and helper of people. It doesn't feel like work because it's fulfilling"

"They were always busy, joining committees and being part of any events we had," said Shelley Belhumeur, a former Sask Polytech colleague. "(Lenny was) always willing to volunteer, put in the time, help students, busy in the centre and with other committees."

Lenny remains active in the community and is not only "knowledgeable about the culture, but able to integrate it into the community," said Belhumeur.

She believes the award is well deserved and confident Lenny will make a great teacher someday.

Being a two-spirit Métis person, Lenny wants to use their education for curriculum reform and bring two-spirit awareness to the forefront.

Besides teaching and advocating for the two-spirit community, Lenny loves to work with children.

Some of this work includes the creation of a children's drum group, formed in 2020, with the support of their daughter, which they said has been a very grounding experience for them both.

Drumming is special because it helped in Lenny's own healing journey and they thought it was something that could benefit the youth.

The connection they feel when drumming is something that developed over time.

"I was drawn to drumming initially through attending ceremonies like Grandmother-moon ceremonies and hearing the drum and learning songs there," said Lenny. "I had been in a sweat lodge ceremony and had prayed to find my voice."

Reconnecting to their culture has been empowering.