Vigil held for Colten Boushie ahead of murder trial 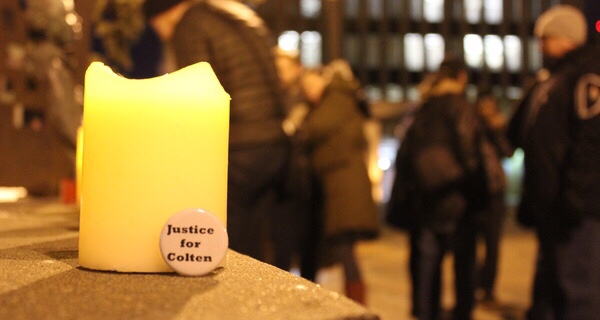 More than 50 supporters attended a candlelight vigil event that took place in front of Regina’s City Hall in support of Colten Boushie, who was killed on a farm near Biggar, SK in August 2016.

The event was organized by members from the Saskatchewan Coalition Against Racism and Colonialism No More. Advocate Bob Hughes said the event was to show solidarity for Boushie and his family, who say they were treated poorly by the RCMP, and that there are a lot of people who will be supporting them through the upcoming trial for farmer Gerald Stanley starting on January 29th.

“It was great to see so many people come out,” said Hughes. “I know it’s really tough for the family to go through, hopefully this [solidarity event] helps them with their spirits.”

The event began with an opening prayer from an elder, then the supporters walked around the fountain and placed the LED candles on the edge. Organizers also spoke about coordinating rides to North Battleford from Regina to attend the upcoming trial.

Joey Reynolds attended the event to support the cause and hopes there’s a positive outcome from the Stanley trial.

“I hope justice will be served for and his family,” said Reynolds. “I hope the courts of Saskatchewan listen to the testimonies and voices of the community for proper justice.”

Jury selection will take place on Monday at the Court of Queen’s Bench in Battleford where Stanley faces a charge of second-degree murder in the shooting death of Boushie.