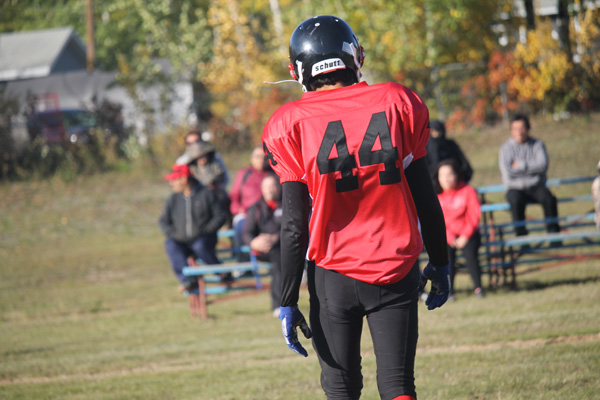 #44 Mans Felske from Buffalo Narrows, who scored seven touchdowns in a game against La Loche.

The playoff picture is beginning to take shape for the Northern Saskatchewan Football League.

On Tuesday, September 22, the Green Lake Spirits finished the season with a perfect 4-0 record by shutting out the Beauval Voyageurs 53-0. Keegan Bouvier and Nathan Daigneault led the winning team with three touchdowns each. This victory provided the Spirits with a guaranteed first place finish in the Western Division and as a 1A team. Green Lake has an automatic place in the 1A championship game for the Ralph Pilz Trophy on Saturday, October 17 in Prince Albert.

On Wednesday, September 23, La Loche Lakers travelled to Buffalo Narrows to take on the Eagles. The Lakers had difficulty with Mas Felske, who found the endzone on seven occasions, leading the home team to a 97-6 victory. TK Pederson added four touchdowns in the winning effort.

On Thursday, September 24, two games were held in Northern Saskatchewan. The first game was held in Cumberland House, where the unbeaten Islanders took on the unbeated Kodiaks from Creighton. The Kodiaks got out to a quick start and cruised to a 60-50 victory. Dean Rainville and Chris Reynold scored two touchdowns each for the Kodiaks. Meanwhile in La Ronge, Chargers hosted the Sandy Bay T-Wolves. La Ronge played a strong game beating the T-Wolves by a score of 54-6. Scoring details were unavailable at press time.

Looking ahead to the fifth and final week of Northern Saskatchewan Football action, La Loche Lakers are travelling to Beauval on Tuesday. A win by Beauval will secure a playoff position, while La Loche would like to finish the season on a winning note. On Thursday, two games will be held. The first game will have the SMVS Huskies travelling to Sandy bay to take on the T-Wolves. The second game will have the Creighton Kodiaks hosting the La Ronge Lakers, to decide first place as 2 A teams. On Friday, the Buffalo Narrows Eagles will finish the regular season with a game in Pinehouse.