Two well-known and respected elders were recently honoured for their service in the community. Maria Linklater and her late husband Walter were announced as this year’s recipients of The Rotary Badge Shield Star at a dinner held on April 17th in Saskatoon. 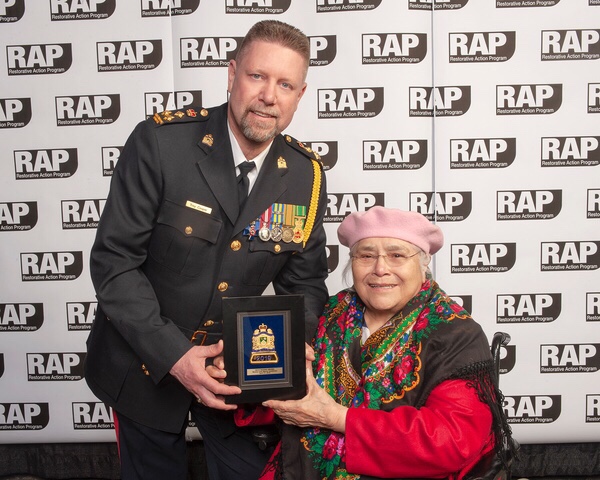 The Rotary Clubs of Saskatoon, in partnership with the Saskatoon Police Service, Saskatoon Fire Department, and Medavie Health Services West, announced the recipients of the Badge, Shield and Star winners who were honoured that evening.

“Walter and Maria Linklater’s work with the Saskatoon Police Service began in 1995 when the Indigenous Relations Consultant position was created. The couple provided guidance in the direction of the position,” according to the SPS statement. “They were the first Elders to join the Chief’s Advisory Committee. They served as Elders overseeing the Peacekeepers Program and assisted the SPS in the design of the Indigenous-specific training courses at the Canadian Police College. They provided consultation in designing the Cultural Room in the SPS Headquarters.”

Sadly, Walter passed away in the summer of 2018 but Maria continues to provide guidance and knowledge to the Saskatoon Police Service.

DeAnna Down, the Disaster Management Coordinator with the Canadian Red Cross, was the other recipient where she was recognized as a valuable partner of the Saskatoon Fire Department and the Saskatoon Emergency Management Organization.

Medavie Health Services West awarded 7-year-old Maddox Babchishin as this year’s recipient of the Star Award. Maddox showed true bravery and heroism when he recognized his 1-year old brother Jack had stopped breathing and the paramedics on the call nominated the little boy to receive this award.

The Rotary Badge Shield Star Dinner was held at the Prairieland Park with this year’s keynote speaker Kevin Garinger, former President and Governor of the SJHL’s Humboldt Broncos. His address focused on Leadership through Crisis.