Saskatchewan Aboriginal Women’s Circle Corporation (SAWCC) was one of many organizations to hold grassroots consultations on Bill S3 in 2018. The Bill will amend the Indian Act and status registration legislation. Their first meeting was in March, and in November they held a provincial meeting in Yorkton featuring Chief Isabel O’Soup, Treaty Commissioner Mary Culbertson, and longtime advocate and activist Sharon McIvor, who first challenged the gender discriminatory nature of the Indian Act and various amendments. 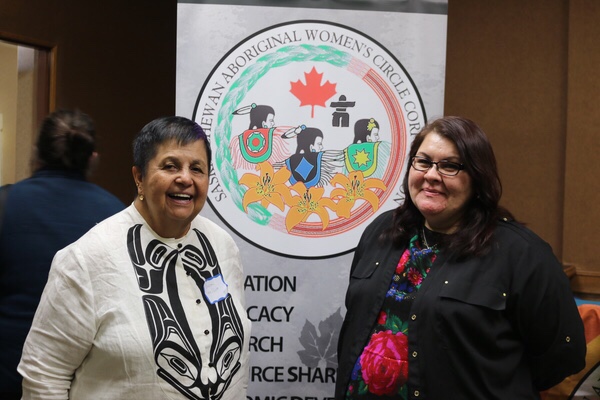 Sharon McIvor and Mary Culbertson in front of the SAWCC banner in Yorkton after speaking about the Indian Act, band membership, and the matriarchy.

SAWCC president Judy Hughes noted that their next session will be held in Stony Rapids in February to give more remote communities an opportunity to share their views on the legislation.

“It’s a legal and convoluted topic, and understanding the Indian Act is very difficult,” noted Hughes, adding there was frequently gender discrimination embodied in it which leaves women and their offspring off-reserve and non-status. “There has to be an end to the colonial violence and discrimination via basic human rights. Without access to your community, there is no access to housing, community, health services and education, and it’s hard to learn about cultural traditions and practices, speak your language, and build and maintain relationships.”

The first speaker was Christine Hall on behalf of the federal government, who gave an overview of the Act, it’s history, and current amendments being considered along with their implications. O’Soup followed, speaking about Key First Nation’s membership code, citizenship, and how she has seen a lot of women denied status through Indian Affairs.

The original Indian Act legislation was designed to eliminate Indians in Canada, introducing many of the concepts of gender-discrimination. Hall said that between Bill C31, brought into place by Jeannette Corbiere Lavall, and Bill S3, some of these patrilineal discriminations would be addressed. Because of the complications of status being 6.1 and 6.2, problems were created and litigation was filed almost immediately. McIvor continued to fight for changes, returning thousands of Indigenous people to status.

More recently Bill S3 has been a response to the Descheneaux case out of Quebec, but first consultations are taking place, with money provided by the Liberal government. They hope to resolve the “cousins’ issue” so that all cousins are treated equally; and siblings, where marriage doesn’t matter to status; along with omitted or removed minors. Hall said they are moving into a situation where First Nations decide who their citizens are. Estimates are this legislation amendment would newly entitle between twenty-eight and thirty-five thousand to registration; possibly as high as 3 million but more likely under three hundred thousand people regaining their rights under the Indian Act.

“Delayed changes will extend going back to 1869, increasing the number entitled to be registered quite significantly,” noted Hall. “This will impact great-grandchildren or even further back, and could affect many people who have no connection to community or Métis individuals who are now entitled to registration under the Indian Act.”

Community consultations began in September, and there is an online survey with a deadline of January so that everyone has a voice, culminating in a report to Parliament in June 2019. Ultimately the government wants to figure out how to get out of the problematic Indian Act, to a place where treaty rights are respected along with the United Nations Declaration for the Rights of Indigenous Peoples (UNDRIP), and putting control back into First Nations.

One attendant noted that more education needed to be done before consultations, many people don’t even know if they’re a 6.1 or 6.2 let alone what everything else means.

“From the get-go, from the beginning the Indian Act was designed to legislate us out of existence,” noted McIvor. “Historically you look back and Britain went into Ireland - Irish were organized like us, in clans, and what they wanted to do was take the land of the Irish people, beautiful land, lots of resources, and couldn’t do it because the clans were there fighting them. So, when they got enough dominance, they took their kids…. They’ve done it over and over again across the world.”

She noted that until 1951, the definition of a person in Canada was “anyone other than an Indian.” In 1985 section 15 of the Charter of Rights and Freedoms kicked in, and McIvor noted they didn’t change the legislation because they thought it was a good idea but because their own law told them they had to, and they still did a bad job of it.

Culbertson is a Bill C31 who became a status Indian when section 35 was introduced and the Canadian charter renewed. She noted that the treaties never said who an Indian was, each nation determined who their people were by kinship ties and identity.

“It wasn’t until they had to pay annuities - five dollars a year - and reserve settlement, acres per family - monetary decisions, property decisions, land: that the government wanted to define who was entitled,” noted Culbertson, adding this was what motivated assimilation and elimination to dilute and effect genocide on First Nations people. “It comes down to dollars, it created a lot of division in communities, it created discrimination.”

The 2008 Human Rights Act was amended only 10 years ago, to allow Indigenous peoples access to human rights legislation. Until then, they had none. She added that the Indian Act creates lateral violence and affects governance.

“These dollars going to Indian acts are better based on capacity and communities,” said Culbertson. “We wouldn’t be here if it wasn’t for those women who were fighting to get those rights back and be recognized as who they were.”

O’Soup agreed that the onus is always put on women, left to deal with the impacts.

“It’s tedious, odds are stacked against First Nations women and their children. Just keep on trying that’s all I can say.”

McIvor noted that every Indigenous person is born with inherent rights, and the government needs to begin to recognize them all. Every second or third party out there who pays taxes to the government does so because of living on Indigenous land. “They’re not subsidizing us at all, they’re giving us peanuts: we, in our resources that we exchanged, are subsidizing everyone else,” said McIvor. O’Soup noted that many call themselves McIvor Indians. “They would never have done it if someone hadn’t made them do it. It started with one woman. Don’t call yourselves Bill C-3s; you’re now going to be called a McIvor Indian,” said O’Soup, adding that “We have one woman to thank and she’s right here.”

McIvor acknowledged that about 45,000 people received their registration because of her case, and so she considers them all her grandchildren.

“Cary Price is one of mine by the way, the goalie for the Montreal Canadiens. He’s one of mine, and a whole lot of others.” She said membership and belonging is key, and the legislation is creating division instead, with fear of scarcity of resources rather than ‘welcome home’. Treaty Land Entitlement in BC has been a payoff, versus returning stolen land they knew they were in violation of. McIvor believes the governments want to eliminate all Indians so that the reserve lands will revert back to the government.

In summary it was noted that it has to be the matriarchs of the community who determine membership, and that we need nations healthy enough to have these conversations where women are praised for their leadership.

“Men have had a big role to play in paternalism, colonialism, and abuse and violence, but have a bigger role to play in reversing them, in protecting. It’s a part of how they’re raised in communities,” said Culbertson, adding every individual needs to step up.“Talking about what we’ve learned here is a big part of contributing what can be beyond the Indian Act one day: healthy people, and healthy males lifting each other up.”

McIvor agreed, “Until we start looking after each other we’re never going to be communities again.”