Young entrepreneurs on a mission 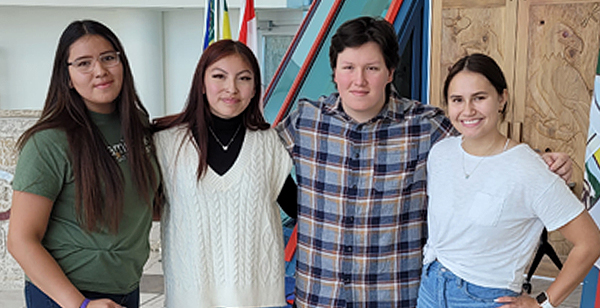 Just before the start of a new school year, a group of high school students and recent graduates had a chance to jump start their brains by spending their days learning how to launch a business.

Jason Bird, camp coordinator, said it was great to have the youth back on campus for the five-day camp.

“Essentially the idea is to introduce them to business because usually in high school you don’t get that kind of exposure to business concepts or to business programs, so that was our goal for the week,” he said. “How we did that was to run a pitch program, so over the week they would develop a project and at the end they would present that project to a panel of judges.”

Bird was impressed with not only the quality of the pitches and ideas but the dedication the youth displayed during the week.

“The students were really gung-ho,” he said. “We tried to get 20 but some couldn’t make it, but the 14 we had were really excited.”

The students stayed on campus and went to class every day and learned from business experts. Because the camp has established a good reputation, many students who attended the camp already knew what to expect and many came prepared like Amy Lavallee.

Her older sister attended the camp previously and her goal was to do better than her sister.

Lavallee’s idea is to create a recycling business, EHIO (Earth Honoured in Our Hands).

She was partnered with Serenity Dueck, Jonah Durnin and Patience Benjoe. The four worked out the details of their business plan and pitched it to a panel of experts.

Durnin said business is not only focused on making money but creating social change.

“We centered it on Indigenous people who are coming out of the justice system,” he said. “To help rehabilitate them and get them started so they can move on to join the workforce again an get their lives back together.”

Durnin said with proper funding the model can expand to northern, rural and Indigenous communities.

Lavallee came up with the idea because she had trouble finding recycling depots in the city.

What would make their depot different is they plan to take in food waste to create compost and accept electronics as a way to reduce overall waste in communities.

The four members enjoyed working together but Dueck said the evening activities like canoeing are what she is going to remember most about the experience. She said not only was it a great learning opportunity, it was also a lot of fun.

Patience Benjoe, a Grade 11 student, said she was just happy to finally be old enough to be a participant. She has attended many of the previous camps but only as a visitor.

Benjoe’s dad Thomas created the first camp when he was a summer student. He is now the president and CEO of FHQ Developments.

When he put the camp together, the ultimate goal was to encourage high school students to pursue a post-secondary education.

“It’s exciting to see how far it’s come and the amount of support from the business community that we have here,” said Thomas. “I think the sponsors really value a lot of the uniqueness that we have.”

This year’s camp was even more special because his eldest daughter was a participant.

“It’s a pretty cool little cycle to see,” he said.

Everyone involved in the camp say they would recommend it to others because it’s a fun way to learn about business.