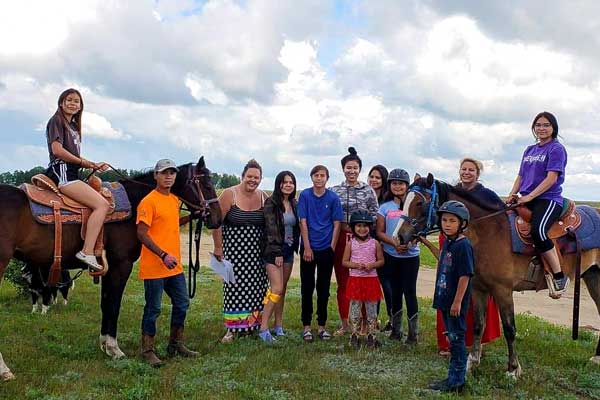 A ‘utopia’, as interpreted by the Young Indigenous Women’s Utopia, is not an imagined state or place of perfection, but a target destination free of the oppression and violence that restrict young Indigenous people.

“The ‘utopia’ represents the stories and visions for a world where young women and girls can be liberated, and living our best lives, whatever they may be,” said Jennifer Altenberg, a Saskatoon teacher and mentor in the Utopia.

“It’s a destination that we’re striving for,” added Kari-Dawn Wuttunee, a community scholar and Utopia mentor. “Along the way to this ‘utopia’, we need to dismantle the mechanisms that project violence on to us.”

The Young Indigenous Women’s Utopia, as described by Altenberg, is rather “undefinable” - a constantly evolving girls and women mentorship group, art collective, and research project - working to challenge gender-based and colonial violence in their communities.

“In the classroom, sometimes we’re more restricted or censored as to what we can dive into and explore, so girls’ group was a way to get some educational tools to young girls in the community,” said Altenberg.

Utopia started as a group of 17 girls, ages 12 to 13, engaging in a research project to explore gender-based violence and how it has impacted Indigenous girls in Treaty 6. Over time, the group got smaller, but in turn, broadened areas and mediums in which they’ve explored.

Utopia has evolved from a McGill University research project collaboration between Altenberg and Wuttunee in 2015. The project facilitated an international dialogue on sexual violence, with girls and young women participating from Canada and South Africa. Their research is on-going, and has spawned a number of research articles and workshops, as well as a Treaty 6 girls group.

The young women of Utopia, now all around 16 years old, have written a self-titled book, published with Chokecherry Studios, produced a short film which won second-place at the International Cellphilm Festival in Montreal, and participated in several workshop series and conferences. They were also recently the subject of the short film sohkeyimowin, directed by Kiyari McNab, which looks into how Utopia has transformed the lives of the young women in the group.

“It’s had a really big effect on me because I didn’t know anything about missing and murdered Indigenous women and girls, gender violence, about inequality for women, and the two-spirited and gay community. The whole thing has been an eye-opener,” said Gabby Daniels, one of the young women who have been part of Utopia since its inception.

“I was shy when we first started. But as I kept going to these workshops, I realized I did have a voice and can use my voice,” said Daniels. “I think (Utopia) has made me think there will be good in the future, that we’ll all be equal. It’s really made me think we can create good in the world if we just keep working towards it.”

The young women in Utopia are now transitioning from being the participant to being the mentors themselves. Currently, they’re planning a workshop for 12- and 13-year old’s, to start talking to a new generation about sexual and colonial violence.

“It’s profound how these girls share their deeply impacted stories about their own personal journey, and how violence has been this perpetual thing as young people,” said Altenberg. “This is what Indigenous girls experience every day, and this is them speaking back to it.”