Four Indigenous judicial appointments make this year a historic one

From 1977 to 2017, Saskatchewan had a mere four First Nations and Metis judges in the provincial court. In the last year, courtrooms in Saskatchewan are finally becoming more diverse, with the historic appointment of four Indigenous judges to the bench: Michelle Brass, Natasha Crooks, Mary McAuley, and Murray Pelletier.

The appointments of Indigenous women (Brass, Crooks, and McAuley) are historic because it is the first time in 20 years, since Judge Mary Ellen Turpel-Lafond's appointment in 1998, that an Indigenous woman has been called to the judicial bench in Saskatchewan. Or in this landmark case, three. 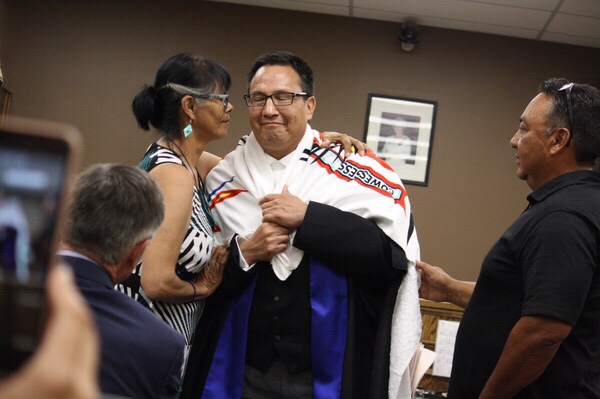 Judge Murray Pelletier was officially sworn in at the Provincial Courthouse in Saskatoon August 2 and he was honored with a blanket from members of his Cowessess First Nation. Photo by NC Raine

“In my belief – the accused, the victims, their families – when they're in court and when they see a judge that speaks their language, understands their culture and background, where they came from, I believe that they feel they're heard and have a fair trial,” Judge McAuley told Eagle Feather News. “So, I think (these appointments are) significant.”

McAuley, from Cumberland House Cree Nation, replaced the recently retired Judge Gerald Morin, who was the first Cree-speaking judge in Saskatchewan and served for 18 years. Also fluent in Cree, she provides those appearing in court with the opportunity to express themselves in their native Cree-tongue.

“I want to make sure I keep on with that level of excellence that Judge Morin established,” said McAuley. 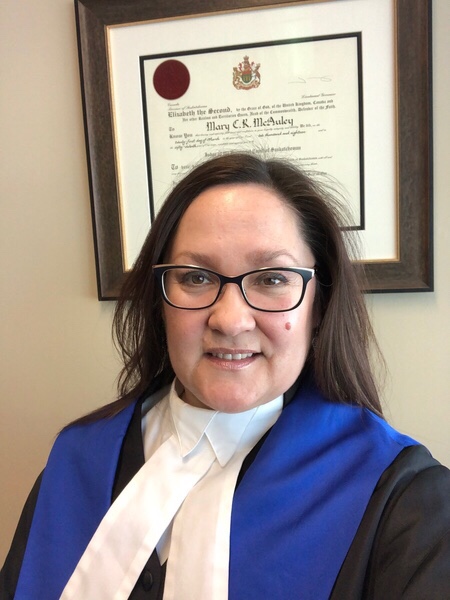 
Despite being early in her career on the bench, McAuley has made an impact in the courtroom. She speaks of an individual at a recent bail hearing known to be aggressive when before a judge. After she remanded the individual, she expected an outburst, but instead the individual thanked her and walked out.

“I think they know when they've had a fair trial or not,” she said. “I think it kind of tips the balance a little bit where they feel a little more confident when the judge is a peer who knows their background.”

“I hope (having more Indigenous judges) will create change. I think, over time, custody will cease to be the only viable option in terms of a sentence. I'm hopeful that we will be able to bring about change in them without always having to put them in jail.”

Judge Michelle Brass, from Peepeekisis First Nation, is also optimistic that these appointments can spark change. Brass, who is the appointed judge at Estevan, hopes to serve as an example for people of all backgrounds in her community.

Brass, who was sworn-in early this year, said it's been a learning experience so far, and is continuing to see that regardless of race, we are all human beings facing the same issues.

“We're still dealing with the intergenerational effects of residential school, and our colonial history, which is contributing to poverty and poverty-related crimes. We're still dealing with a population boom, where our population has increased thirty-percent over the last ten years,” she said. “This isn't an exhaustive list; this is just looking at why things are the way they are.”

In the wake of some historic trials in Saskatchewan over recent memory, many in the province have called for changes the judicial system. While those changes may still be question marks, experts say adding Indigenous perspectives to courtrooms will foster understanding in culturally sensitive issues.

“In terms of Aboriginal and treaty rights, there's an increasing recognition of Indigenous people's own laws forming the laws of Canada,” said Shoshanna Paul, Aboriginal Law North Chair in the Saskatchewan Branch of the Canadian Bar Association.

“This raises the question – do we have anyone with experience or expertise in our courts in Indigenous peoples' own laws? Being Indigenous doesn't make you an expert in your nation's laws, but it'll be more likely that you'll be sensitive to it,” she said.

Paul, who is from English River First Nation, stresses the significance of these judicial appointments, saying that it will breathe more life into the inclusion of Indigenous legal traditions within the overall Canadian legal system.

Even something like Judge McAuley's fluency in Cree creates meaningful inclusivity in the courtroom, she says.

“If you think about the language barriers that might exist – for some people their first language may not be English. Do we have a criminal justice system that can accommodate for that? Well with Judge McAuley, yeah. That's pretty significant.”

While progress is being made in Saskatchewan, the federal government currently has no Indigenous judges on the supreme court. Of the 153 federal judges appointed in Canada from October 2016 to October 2018, only six were Indigenous.

Marilyn Poitras, Director at the Wiyasiwewin Mikiwahp Native Law Centre said she hopes other provinces can follow Saskatchewan in increasing their judicial diversity.

“The Calls to Action from the Truth and Reconciliation Commission (TRC) is the impetus,” said Poitras. “When one province starts that kind of movement, the other provinces can follow suit.”

“We're adding Ingenious perspectives, experience, knowledge, understanding, insight, creativity, to the bench. I expect that will start to come out in decision making.”

Poitras noted that the justice system has historically been a racist place, and these appointments may bring more accountability in the courtroom.

“Having a brown person in the room when there typically isn't one will definitely change the conversation.”