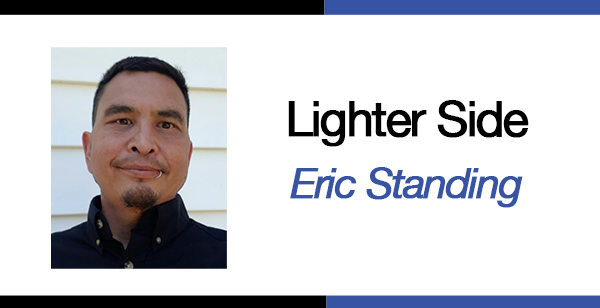 Tech can be a struggle for me.

It wasn’t always this way, however. At one point, early in childhood, I owned a simplified version of a portable computer that taught basic coding, which is to say I had a rudimentary understanding of computer programming as an eight-year-old in 1986.

Unfortunately, I soon became distracted by a camera someone had given me, and so “My First Computer’’ came to rest in the bottom of the toy box for a few years.

Then as a teen, I realized that I could carry around a pager and, with this device, friends could contact me from anywhere at a very low monthly rate, and I could simply return the call from a landline or a payphone.

Eventually, this led to a cell phone in the late 90s and the discovery that I could simply tap the buttons multiple times to bring up letters on the screen, spelling words that could be sent to other users’ screens, thereby avoiding the need for lengthy conversation, a process we now call “texting.”

Not only that, but I discovered I could go on the corresponding websites to my friends’ phone carriers and type text messages to them with my keyboard from my computer at home and they would receive it on their mobile phones.

After excitedly showing people this, I was laughed at, and told, “Why wouldn’t you just call?”

Alas, true visionaries are often shunned, and now actual phone calls are treated as though answering them may spread leprosy, and most people want to know, “Why wouldn’t you just text?”

Had I stuck with computer programming, I can only assume that my days would be consumed with the stress of racing my fellow billionaires into outer-space and choosing what kind of caviar to eat rather than peacefully writing for a newspaper, so I can count my blessings.

The irony is that 36 years later I am now traveling around with a camera someone gave me and an outdated laptop (simplified version of a portable computer) for a living.

So it was over the years that my appreciation of modern technology was replaced by a fascination with all things primitive and my smartphone could not hold my interest as long as rubbing two sticks together to make fire. I discarded my Blackberry and switched to a flip-phone that I clung to until six years ago.

Lately, out of a mixture of necessity and interest, technology has been nosing back into my life, a little at a time, and I have found myself creating podcasts and working on documents in real time with people from around the world, much to my advantage.

One thing I don’t look forward to anymore is all the apps that I seemingly have to download in order to do daily life.

What used to be a wallet full of membership cards has now become multiple screens full of apps to pick through every time I want a cheeseburger on the road, since luckily the app craze has not yet reached every business in my small town.

Years ago I found myself commuting to Regina for work and, having stopped at a particular mega-chain gas station, realized they had a loyalty program, so I signed up.

After what felt like thousands of dollars worth of gas and cinnabon purchases, I proudly produced my loyalty card from my wallet and presented it to the cashier, assuming the next tank would be on them.

She scanned it and gave me four cents off the cost of my food and gas. I had earned four cents … for being loyal to them for months on end.

No thanks, from now on I will support my local petroleum vendors. I don’t know exactly what price my loyalty can be bought for, but I do now know that it is worth more than four cents. Perhaps a nickel?

Frequently crossing into the United States makes things even more difficult for app-phobics like me since up until recently an app was needed just to cross the border.

This border crossing app is no longer necessary but when shopping, the apps needed to save money in the U.S. are not available on my Canadian phone, and I refuse to pay for and carry a separate phone so that I can save on donuts at McDonald’s U.S.

As quick as the corporations are to sign a person up for their app program, the same speed can not often be seen when attempting to cash in on these rewards.

“I have a bunch of reward points on my app and I want to cash them in.”

“Do you have your membership card?”

“I thought you switched to the app.”

“We did but we still need the card to redeem points.”

Then when I go home and fetch the card, I am told that these points can only be redeemed on a wednesday evening if there is a full moon and Mercury is in retrograde.

Then what’s the point?

I miss the days when I could just buy a pop and chips without having to swear an oath of  eternal loyalty to a corporation and, besides, I am completely out of password ideas at this point.