Suffice to say, 2016 was a very difficult year. Just read the news. Often when we consider our news maker of the year, it is easy to get a couple of really good and positive stories into the mix for the voting. Unfortunately this year was quite the opposite.

The past year we faced was violent and dirty. The Eagle Feather News team narrowed down the stories to the school shooting in La Loche, the Husky oil spill on the North Saskatchewan River, the Colten Boushie shooting and the confrontation and violence at Standing Rock. None of these stories were fun to tell and there aren’t any happy endings in any of them.

We didn’t leave it up to us, though. We left it to the readers and hands down they picked the Standing Rock protest and conflict as the news maker of the year for 2016. Even though it was an American story, call to protect the water and support the Standing Rock community was strong. The defenders of the water were going to make sure the Dakota Access Pipeline was not going to be built under a Missouri River reservoir near Standing Rock Sioux Reservation. 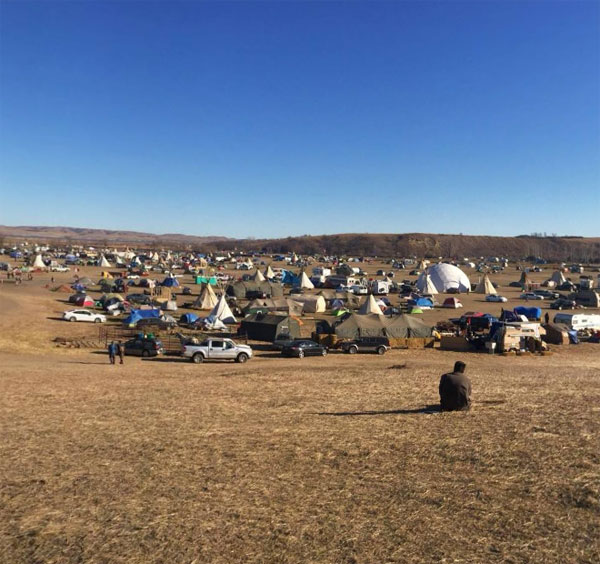 Standing Rock was voted Newsmaker of the Year by our readers. Thank you for voting!

After witnessing the violence that the police force used on the protestors sparked outrage around the world, the cause and emotion spilled over into Canada with many people making the trip down to support the water protectors. Even though many complained that the mainstream media ignored the protest, there was never a lack of news coming out of the territory as live streaming and social media platforms carried a majority of the action.

People sent supplies and fundraised. Eventually several thousand veterans showed up in support and stood between the protestors and police. To the jubilation of the camp of protestors that swelled to over 13,000 people at times, it was announced that the project will be put on hold. Following that the Veterans asked for and received forgiveness from the Dakota people because of the violence and broken Treaties that littered North America. A massive blizzard has hit the camp and the community is now asking everyone to pack up and go home. Some insist the fight isn’t done yet and vow to remain vigilant. This story is far from over because in January, Donald Trump becomes President of the United States of America and he likes oil and coal.

Racism, oil and gas development and pipelines and violence in our communities are all realities that are going to be important issues to tackle in 2017. It is a staggering list but the harsh reality. Financial resources are scant in the north and the recession has not made things any better. Those issues tied to colonialism and residential school trauma led to incidents like the shooting in La Loche or even the crisis in the north with young people taking their own lives.

Add in poverty and poor rural Indigenous and non-Indigenous relations and that spills over into the Colten Boushie shooting. This case will receive plenty of attention in 2017 when it hits the courts. The province has yet to come to terms with the stinging racism that erupted online after Colten’s passing. This story is tragic all around.

And just wait until next year when they start cutting ground for the replacement pipeline that is going to run through parts of Saskatchewan. The chatter online has people talking protest already. This is going to be a difficult season since the deal is approved and it is all legal and above board. Will that stop the protests? Not a chance.

That was a pretty heavy year and we hate to bum you out. Always remember that even though there have been tough times there is still lots of love and joy out there and ordinary people are doing extraordinary things every day in our communities. So continue reading on. You will find much more uplifting news in the remaining pages of the paper.

Merry Christmas and Happy New Year to everyone and may you have safe travels and good tidings this holiday season.