Indigenous leadership attended one of the largest Muslim gathering in the U.K. earlier this month to promote a message of peace.

Chief Rene Chaboyer from Cumberland House in northern Saskatchewan was one of the Indigenous leaderships who attended Jalsa Salana which is the largest international annual Muslim gathering in the UK to promote Islam’s message of peace.

“ was a very big experience…I can feel the love interacting with [everyone at the convention],” said Chief Chaboyer in a statement. “It was a unique experience…and I very honoured to be part of it.” 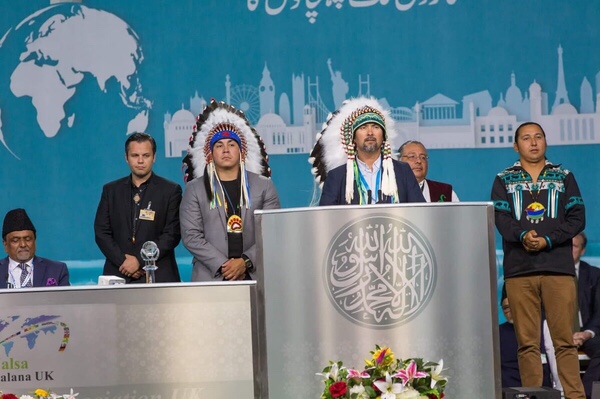 Indigenous leadership from Saskatchewan recently attended the U.K.’s largest gathering of Muslims to spread a message of peace. Photo supplied

Chief Chaboyer was accompanied by other Indigenous leadership that included Whitecap Dakota Nation councillor Dalyn Bear, Waterhen Lake First Nation councillor Dustin Ross Fiddler, Chief Myeengun Henry from the Chippewas of the Thames First Nation, as well as Dr. Jaris Swidrovich, Assistant Professor in the College of
Pharmacy and Nutrition at the University of Saskatchewan and member of
Yellow Quill First Nation.

Chief Chaboyer’s message was briefly explaining the Indigenous culture in Saskatchewan and the spirit and intent of the Treaties to create an understanding.

“We remain proud of [our ancestors] leadership and their vision regarding our coexistence with the settler society…our elders knew that change was coming as it is in our time. We waited a long time for Canada to respect and honour our . Many times, we thought the delay was deliberate and tied to the provincial and federal government policies of neglect and extinguishment. We often think the colonial strategy was regime of the Indian Act and residential schools for complete assimilation was and remain the plan that we would forget our treaty and disappear. But we will not disappear and we will not forget.”

More than 35,000 thousand guests attended the convention, which took place on August 2-4 held at Oaklands Farm in East Worldham, where Indigenous leaders and other leaders from different part of the world attended.

Rashid Ahmed, who is part of the Muslim community, said they have a good relationship with Indigenous community from the last few years. 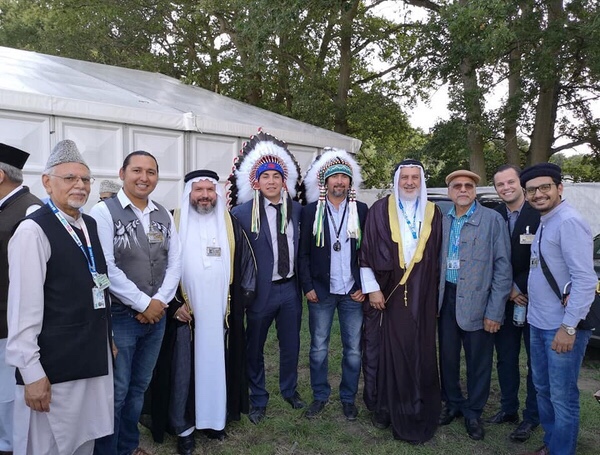 Indigenous leadership from Saskatchewan were among the 35,000 people attending the gathering. Photo supplied

Ahmed added that he was very honoured when the Indigenous leadership accepted his invitation to attend the Jalsa Salana.

“I have learnt so many great and common things between Ahmadiyya Muslim and Indigenous communities during the trip. I have been working with Indigenous community from the last few years in Saskatchewan. I have found so many similarities,” he said. “We are working together in Saskatchewan from the last few years. We have organized combined food drive for the Saskatoon Food Bank last year with the help of Indigenous Students' Society. We have built a park in Standing Buffalo First Nation with the help of our volunteers. Through love and affection, we hope this is just one more positive action the Indigenous and Ahmadiyya communities can take in the community together.”

The convention was run by volunteers from the Ahmadiyya Muslim Community who cooked, distributed water and guided guests around their community.