When I began my journalism career, I never imagined I would spend the majority of it with one outlet. However, my work at EFN aligned with my duty as a non-Indigenous person in this province and country.   No matter your career, it is generally unheard of to stay somewhere 15+ years, yet that’s how long I have worked in some capacity for Eagle Feather News.   Armed with my journalism degree and a job as a server, when I moved to Saskatoon in 2004 after a stint as a reporter for The La Ronge Northerner, I was determined to make it as a journalist, so I approached EFN about writing.

As a non-Indigenous person, I have always viewed it my duty to do my part in bridging the two communities and to teach my son the history I never learned until much later. I am not yet 40, but I didn’t learn about residential schools in elementary or high school, nor did I learn about them in university (which is mind-boggling, given I have a journalism degree – I had to double-check this with a classmate because it seemed outlandish but neither of us remember much, if any, content). I learned about them on the job with EFN and MBC Radio. Thankfully my son is learning this history much younger, and he is also learning about Indigenous culture: I’m proud he can count to 10 in Cree! 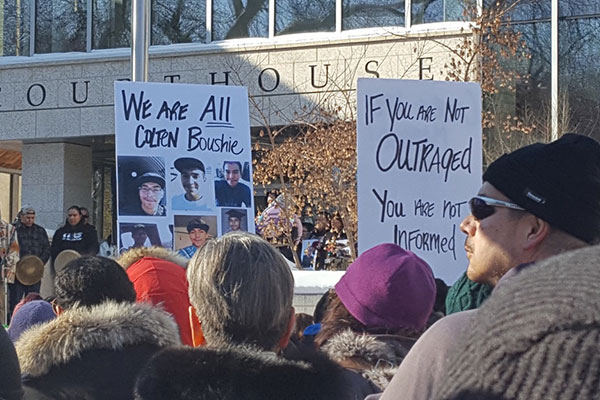 One of my most poignant memories of my time at EFN is taking my 3-year-old son to the Saskatoon rally in support of the family of Colten Boushie after Gerald Stanley received his not guilty verdict. I looked around and saw a tragedy bring together non-Indigenous and Indigenous people as allies, wanting a better, more just future for Indigenous people on this land. And while my time at EFN has come to an end, I will continue to be an ally and friend to Indigenous communities and you, my Indigenous neighbours and friends, because my duty continues as a citizen.

My final thought: since the website launched in 2013, I have been posting stories and reading your comments. Please, always choose your words carefully, whether in an email or a comments section. If you wouldn’t say something to someone’s face because it is mean or hurtful, please don’t hammer it out on your keyboard. If you would say it to someone’s face, but it’s still awful, don’t say it. Words are powerful: let’s use them for good. Choose kindness. It’s the only way forward.