Sunday August 5th around 2:20 in the morning, the Creator called home Elder Walter Linklater. He was surrounded by family who sang him off on his journey, just how he wanted it. The community is less because of our loss, but better because of his work and legacy. 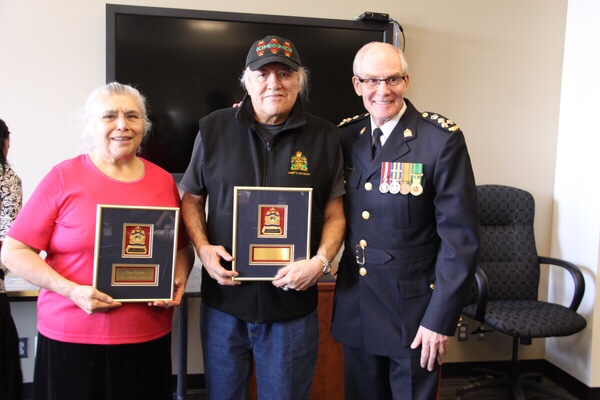 It was rare to be at an event in Saskatoon without Walter and Mariea praying for us. The husband and wife team have been spiritual and cultural leaders in the city for several decades. Walter started out as a school teacher and eventually taught at the Saskatchewan Indian Federated College in the social work department. He also led numerous cultural camps.

He and Mariea were Elders at several schools and post secondary institutions. They ran weekly sweats and annual culture camps. They have fostered over 300 children. Walter was the Elder that helped swear in many Saskatoon City Councils and Police Chiefs. It was through policing that I really got to know Walter.

Back in the year 2000, the Saskatoon Police Service was under the microscope after the “Starlight tours” became public. During this time the Washington Post called Saskatchewan “The Mississippi of the North” and Amnesty International had a watch on our Police Service. There were confrontations over race in the streets, rage and anger everywhere. Times were dark.

I was retained to lead two-day Aboriginal awareness seminars at Wanuskewin for the entire Police Service following this incident. Walter was asked to be the Elder for the process. I was lucky. He took me as his helper for his session. I handled his smudge. He guided me. Taught me the process and trusted me to help him in this important ceremony that opened his sharing. He showed me so much patience.

Walter spent a full morning with each class. He talked to them about his personal journey from down in the dumps street drunk to his revelation and embracing of his culture and spirituality. Walter talked about the residential schools. He shared his story. What he saw. The impacts on him and how it led to his alcoholism. He shared how he was so caught in the cycle that his get rich scheme was plotting to corner the market on vanilla extract to sell to all the other bums in North Battleford. That story always got a laugh.

When he talked about how his culture and spirituality turned around his life, the officers paid attention. His gentle way of speaking, his sideways jokes to lighten the mood or make a point and his ability to talk about issues without laying blame engaged those officers like nothing I had ever seen. His story gave many of those officers a perspective of the First Nations history community they had never considered. His story telling skills and what I learned from them has had a profound influence on how I present delicate information in our Aboriginal awareness seminars to this day.

Walter and Mariea and several other local Elders helped create the Chief’s Elders Advisory committee. Working closely with the Saskatoon Police Chief, the Elders provide cultural guidance and invaluable community input on crucial issues. They meet quarterly and also participate in cultural events and ceremonies. They even went through ceremony for the Police Service to earn an Eagle Staff. The work of Walter, Mariea and all those Elders has changed that Police service to be almost unrecognizable from the one in the year 2000. Job well done.

Beyond policing, Walter and Mariea went into jails and offered care and prayer for the inmates and guidance for the staff. Our jails are under resourced. Inmates are grateful for any sort of offering, whether it is free copies of Eagle Feather News (You would not believe the letters we get thanking us for giving them the paper because it is all that they have inside) or the patient ear of an Elder like Walter.

We have lost a justice champion but the work that Walter has put in will reverberate for decades. Mariea will still be that strong voice in the community. Walter and Mariea’s children are community leaders, storytellers and role models in their own right. Walter has impacted thousands of lives in his work. How many hundreds of people attended one of his Saturday sweats? Think of those that Walter has mentored by praying at events and the lessons they learned from working with him during projects. City of Saskatoon employees and political leaders. Countless educational staff and students. Corrections staff and inmates. His students.

All of us who have been impacted by Walter will remember his teachings on the importance of culture, spirituality, patience and mutual respect and hopefully we will emulate that. Thank you, Walter, for what you have given us.