Nothing worth having, comes easy.

It's something I remind myself of often, especially now.

Although I've never been one to shy away from a challenge, as a kokum, I thought my uphill battles were behind me. Little did I know I would face my toughest one yet.

On Halloween night, while children and adults enjoyed the evening's festivities, I laid in a hospital bed wishing I could be anyone else in the world.

Had it not been for an unfortunate turn of events I would have been out with friends dressed in my costume of choice.

Instead, my daughter and my mother kept me company as I awaited to be wheeled into the operating room.

Earlier in the day, after consultations with several doctors, I consented to a below-the-knee amputation.

It was not an easy decision, but there was really no other choice. 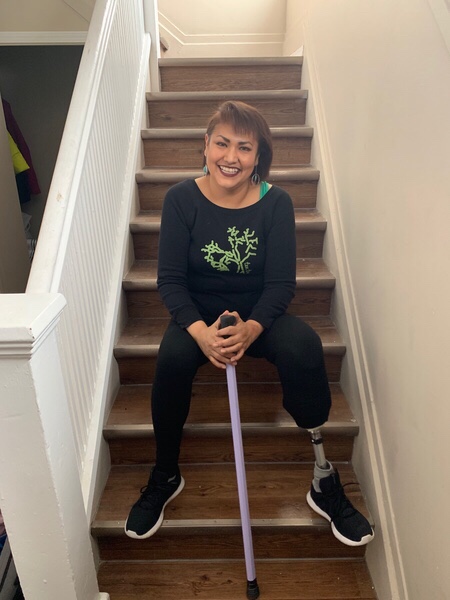 Kerry Benjoe made the difficult decision to have a below-the-knee amputation.

I had been living with a mid-foot break for more than four years. According to the surgeons, even under the best of circumstances, it was not an easy fix. It was either cut the leg off now or face years of surgical procedures and possibly amputation at a later date.

My broken foot had already caused me years of constant pain and sleepless nights.

I was simply exhausted.

By choosing the surgery I was agreeing to give up so many things, but I felt the trade off would be worth it.

I was far from logical and composed the day I made the decision.

The moment the doctors mentioned amputation, I burst into tears, because I loved my legs. They were a perfect pair. I dressed them up often in pretty tights and the most fantastic footwear. I had considered my legs to be my best feature, so it was not easy to break up the matching set.

As I cried cradling my damaged limb, it was then I realized it was time to let it go.

The doctors who delivered the news sensed my anxiety and did their best to reassure me I was making the right choice.

My biggest fear, at the time, was facing the unknown.

Prior to everything, I knew who I was, what I was and where I was going.

I was an independent, single mom who worked in a field that helped me tell the stories of Indigenous people. I had a lot of responsibility and people depended on me.

Ironically, the surgery itself was the easiest part of my journey.

Having to depend on others has been a hard pill to swallow, but I am learning to ask for help when I need it.

On January 8, I was able to stand using a prosthetic.

To stand and take my first step was the most liberating feeling in the world, because up until that point, walking and running were things I could only experience in my dreams.

I named my leg Hardy, after Hollywood actor Tom Hardy, because I don’t want to think of my prosthetic as an object.

It may not be the same as my old leg and it may be ugly, but it has given me back so much already that I can’t resent it.

What I do not like are the circumstances, which caused my original injury, but I do not regret what I have learned from it.

Physically, I am adapting to life as an amputee and adapting is the key.

What I wasn’t prepared for was how the loss would impact my sense of femininity.

It is a hurdle I am still working on.

With physio-therapy, I am learning to walk again and soon I will do so without any walking aide.

As with anything the response by others to my amputation has been mixed.

While strangers awkwardly stare at me, my children and my friends reassure me that I am still the same person.

My life is not over and my story is not finished.

When people ask what happened to my foot, I say, “domestic violence.”

It’s not easy to be open about such a sensitive subject but it's a conversation we all need to have especially in this province.

Domestic violence is not my shame to carry and even if I wanted to, I can’t cover the damage it has done with a pretty little story.

Unfortunately, I wear domestic violence where the world can see it.