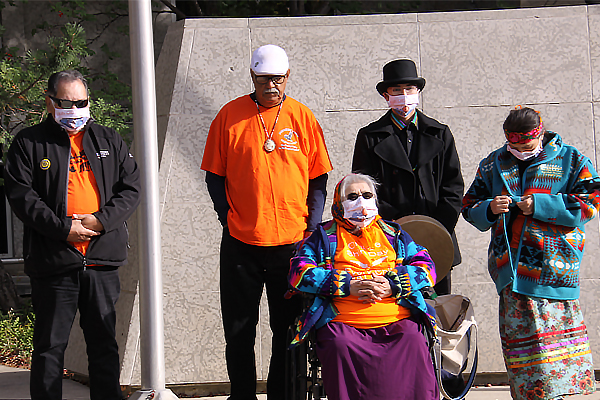 I recently had the opportunity to see a few of my role models shine. The City of Saskatoon held a press conference to encourage everyone to wear an orange shirt on September 30 to honour the children that did not come home from the Indian residential schools, the survivors of the schools and their families.

The Saskatoon Survivors Circle was represented by Gilbert Kewistep, Eugene Arcand and Mariea Linklater. The three champions are everywhere in the city, offering their guidance, leadership and themselves to the community. They influence our leaders; they engage the non-Indigenous population with their stories and presence, and they lift up fellow survivors and help them on their healing paths.

This day though, they gathered for the media. Gilbert is always soft spoken, and he stayed in the background, but asking Eugene and Mariea questions with media present is always a treat because you know they are not going to mince their words. I got the first question at the press event and asked Mariea what her day was going to look like for Orange Shirt Day. Four minutes and 20 seconds later she ended.

Here are the gold highlights that she told the media. “It will be a happy day, that I am able to see this day and tell the truth about what happened to us. As a result, you see what has happened to our people today. We are an industry. Our parents didn’t know how to parent us and now it is hitting the other generations.”

“Tomorrow I will start off with a smudge and think about Creator. Orange. It reminds me of the tiger lily and how beautiful it is, our Saskatchewan flower.”

Then Mariea told a powerful story about one of her experiences in the school with a little boy named Frankie. It is very triggering so I will not repeat it here, but several journalists had to listen to Mariea talk about abuse and murder in the schools and the lack of caring. It was moving. Gut wrenching. And those journalists had to hear her truth.

“We are never going to go away,” said Mariea. “Some people tell us, get over it. I would like to see them get over it if they had their children murdered and beaten and thrown out. We are good and kind people and will continue to share and talk about this.”

The topper was when Mariea was asked the one thing Canadians can do to foster reconciliation in Canada. Her answer. “Loot! Money! So we can build our lodges to get well. We need healing centres to bring our families. Money talks.”

To bring the point home, Eugene stepped forward with a book. It was the National Student Memorial Register: Remembering the Children that Never Returned Home, a publication of the National Centre for Truth and Reconciliation. The book contains almost 3000 names of the children that they have been able to confirm died in the residential schools. Eugene held it up and opened the pages so the reporters could see name after name of children that died because of government policy.

Eugene and Mariea, two leaders and survivors, in just seven minutes of interaction with the media, made a lasting and permanent impression on people who tell average Canadians the news on a daily basis. And our survivors, not just Eugene, Mariea and Gilbert, do this across the province on an almost daily basis.

Melissa Cote, the City of Saskatoon Director of Indigenous Engagement agrees about the impact of the survivors. “They are integral to the work that we do. If it weren’t for them speaking their truth, we wouldn’t be where we are today.”

Let us lift those survivors up every time we see them. Their candor, bravery and the fact that they are still here moves them all up my role model list.

Now from role models to politicians

Wow, that was a hard turn, but we would be remiss to not mention the provincial election happening October 26th and the civic elections running province-wide in October and November. I tip my hat to anyone that throws their name in to run for public office. The demands of the job are onerous. People attack you for no reason and the job is mostly thankless. So, thank you for trying to serve our community. Those of us that don’t run and just lob insults from the sideline, our job is to vote. So, vote by mail. Vote in early ballots or vote on V-day. However you do it, just do it. Vote. And wash your hands!