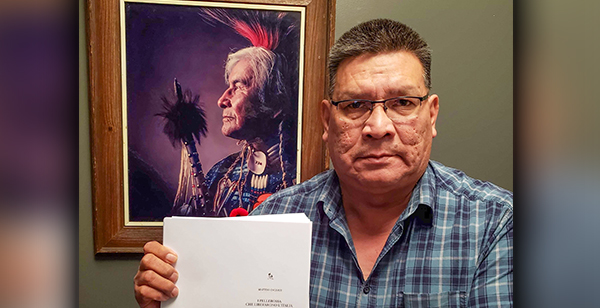 Henry Beaudry Jr. with a manuscript of I pellerossa che liberarono l’Italia, which includes an account of his father’s service in Italy in the Second World War. Photo submitted

The late Henry Beaudry Sr. and other Indigenous veterans who helped liberate Italy during World War II have been featured in a book by a well-known Italian writer.

Henry Beaudry Jr. said his father would have been honoured to be included in the book.

Beaudry Sr. joined the Canadian Armed Forces in 1941 and Beaudry Jr. said his father enlisted in Paynton, Saskatchewan to see the world, experience life and fight for his country. Beaudry Sr. lived on the Poundmaker Cree Nation, Mosquito First Nation and Sweetgrass First Nation and was the great-grandson of Chief Poundmaker.

The book was written in Italian and was released this past June. Incerti said he hopes an English edition will be finished by the end of 2021.

The book relates how Beaudry Sr. was captured by the Nazis in Ravenna, Italy.

“I would like to see the site where my father was captured,” Beaudry Jr. said. “They fought all night and they ran out of ammunition and they were rounded up and taken by German officers.”

Incerti and Beaudry Jr. said they enjoyed speaking with each other over Skype about Beaudry Sr.

“It was simply great,” Incerti said. “Now I have a Cree brother. I have a long trip to do in Canada.”

“It was an honour for Matteo to get ahold of me and for my father to get recognized,” Beaudry Jr. said. “He was very interested in my father’s story. One day our family would like to write our own book about my father.”

Incerti said Beaudry Sr. and the other Indigenous veterans mentioned in his book are true heroes.

“This book is not just about war and history,” Incerti said. “It’s about life and hope. It’s the story of hundreds of boys and men that volunteered for the freedom of a people. They were discriminated against in reserves and in the terrible residential schools and they could not vote, but they decided to come to fight and die for us.”

Beaudry Jr. almost joined the Canadian Armed Forces but his father told him not to enlist.

Beaudry Jr. is a business development specialist for the his First Nation’s economic development arm and said he learned many lessons from his father.

“He showed me the work ethic that he had and the respect that he had for humanity,” Beaudry Jr. said. “My dad was a humble man. I never saw him angry. I attribute that to the horrors of war that he witnessed. My father provided for us with his hard work. He gave me affirmation that I was doing good.”

Beaudry Sr. became a celebrated artist after the war. He passed away in 2016.