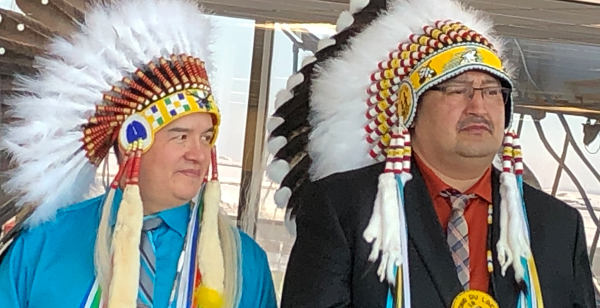 The pressures of containing the spread of the novel coronavirus have been compounded by mechanical problems at the First Nation’s water treatment plant: a state of emergency was declared on Nov. 9th, just three days after the first case of COVID-19 was confirmed in the community.

About four new cases were recorded each day after the first cases, reaching 60 confirmed cases on November 19. About 190 other cases are under investigation.

“Over 25 per cent of the population is affected by COVID -- that’s a huge number,” said Chief Louie Mercredi on Thursday.

Fond du Lac is located in northwest Saskatchewan, near the border of the Northwest Territories, and is home to about 1,000 people.

The water treatment plant there was built about three decades ago and has deteriorated over time and some parts have gone obsolete, Mercredi said. Parts that are available have been ordered and the repairs could be done as early as Friday or Monday, he added.

A reverse osmosis water purifier will be set up in the community, which will allow people to fill up water jugs with treated water.

Work on a $9 million water treatment upgrade will begin in spring 2021, Mercredi said.

In a press release, the band’s COVID-19 coordinator Diane McDonald said that the treatment plant issues meant community members have been without adequate access to clean water. By declaring the state of emergency, the band gained access to more funding.

“However, the virus is spreading so fast we are overwhelmed by what steps to take next,” McDonald said.

The band does have a clinic, an emergency bed and two examination rooms but not nearly the resources of more southern nations and communities, the chief said.

In previous situations where a patient has required hospitalizations, they have had to wait at the clinic for a plane to arrive in the community and fly them back south for treatment, Mercredi said. In some cases, a patient could wait for several hours before a plane arrives.

“If someone needed to go to hospital immediately, I don’t know if that’s going to happen due to the airline issues that we’re facing as an isolated community,” Mercredi said. “If we have to send out 10 people [for treatment], that’s going to be a big struggle again.”

The chief said he does not know how COVID-19 made it to Fond-du-Lac but thinks it might have been from travel to Prince Albert, which he said is a hub for the community.

The chief said he expected there would be cases in the community when the Saskatchewan government began allowing businesses to re-open.

Mercredi said people have to take precautions and responsibility for their own efforts.

“The only people that can control this is us … we cannot blame anyone else but ourselves if these COVID cases keep creeping up,” Mercredi said.