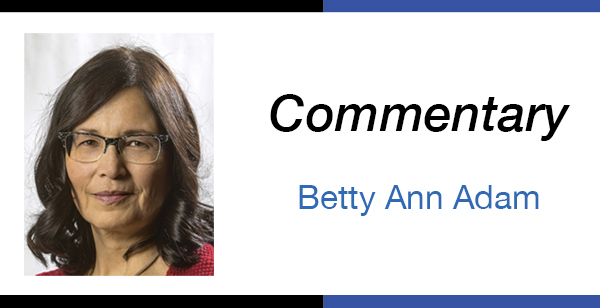 I love that International Women’s Day falls near the end of winter, just as we notice the days growing longer and the sun shining warmer.

The emotional lift that comes from nature’s resurgence is not unlike the joy of the annual celebration of women’s ongoing emergence from the oppression of colonial patriarchy.

This special, women-only edition of Eagle Feather News features the voices of some of Saskatchewan’s most prominent and respected Indigenous Women.

It’s a bountiful feast to be savoured; its variety of flavours to be enjoyed in small bites or in one super-satisfying sitting.

More Indigenous women than ever now lead Saskatchewan First Nations, teach in schools and universities, own businesses, fight as lawyers and hand down verdicts as judges, so we celebrate progress on many fronts.

Yet, women in Canada still earn 75 cents to the dollar earned by men, a Statistics Canada finding that shows the gap is even greater for Indigenous and other racialized women.

Jobs predominantly held by women are less valued than those more commonly held by men – a truck driver can expect to earn about $45,000 per year, while early childhood educators bring in a little over $25,000.

We’re more likely to work at minimum wage and part time jobs. Even among people with bachelor’s degrees, women earn on average, $69,063, compared to men’s $97,761.

In this issue, we learn what our sisters are doing.

Louise Bernice Halfe sets the tone, lifting up some of her favourite women warriors.

Senator Lillian Dyck shows us how embracing her Indigeneity empowered her.

Other warriors are fighting racism and discrimination on the front lines, where we are still dying and our bodies still harmed in colonial systems.

Erica Lee takes us on a walk in the neighbourhood, where police too often behave like an occupying force and small civilities can’t be taken for granted.

Alyson Bear and Patti Tait take aim at the legal and “correctional” complex that too often operate with a cold disinterest of the safety of our sisters, like Kimberly Squirrel and Cindy Gladue; Alisa Lombard takes the battle against coerced sterilization to international fora that demand, but have not seen, substantive action by Canada.

The bane of domestic violence remains a reality for too many women: Kerry Benjoe shows us her journey of coping with the aftermath, her refusal to stay down and her determination to embrace her whole being.

Humour is the powerful tool Dawn Dumont, Judith Iron and Bonnie Leask celebrate - the laughter that helps us slog through the hard times, enlivens togetherness and allows us to take ourselves less seriously, broadening and deepening the image of Indigenous womanhood.

Maria Campbell’s childhood memories of friendship that bridges race and culture reminds us of the many non-Indigenous women we love. This month’s Reconciliation Ally is Jeannie Coe, who found ways to make the health system work better for many who need it most.

Merelda Fiddler’s deep dive into her family’s history and her daughter’s awakening interest in it shows us our own roles as strong links in the chain of generations.

Likewise, Sophia Lagimodiere’s physician sister brings the holistic wisdom of our people to mainstream medical practice; Jordyn Burnouf’s visions of the old ones on the water and land resonates with us all. Elder Bernice Taypotat’s remembrances remind us how much things have changed.

Karon Schmon and Leah Dorion introduce us to the ancestral Métis matriarchs, whose teachings and kindness are sources of pride and strength.

Writers among us are inspired by the late Bernelda Wheeler, the first Indigenous women to take the mic at the CBC and amplify our people’s voices. Her daughter, Winona, does her mom proud every day.

Shayla Sayer-Brabant brings us word of Nicole Akan’s subversive side hustle that delivers Cree language and philanthropy in the guise of fluttering feminine lashes.

It’s a lot to chew on. We hope you enjoy this issue. Keep it to read again or pass it on to another woman who will see herself and love herself and her sisters a little bit more.