9-ball champ aims to own the table at worlds

Haydar-Ali Cappo is aiming to be the next Junior World 9-Ball champion.
In August, he secured his shot at the title when he became the Canadian Junior champion. 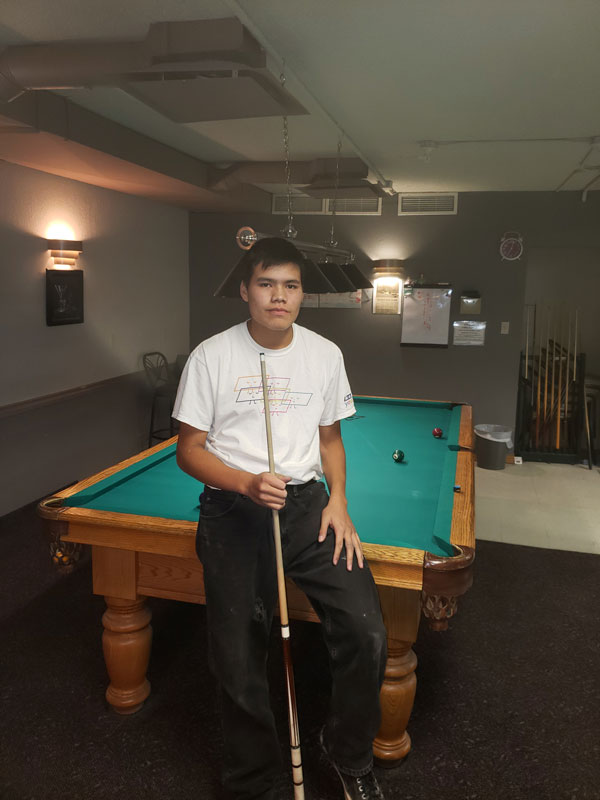 Haydar-Ali Cappo is the reigning Canadian Junior 9-Ball Champion and is aiming to raise funds to compete for a world title in Cypress.

It’s the 16-year-old’s second time competing internationally, which is an accomplishment in itself considering he only began playing the game last year.
Cappo lives on the Muscowpetung Saulteaux First Nation and is a Grade 11 student at the Chief Paskwa Education Centre.

To compete at an elite level requires him to practice every day, which is challenging.
Cappo and his dad travel to Regina as often as possible so he can practice, but because of his age he can only play until 9 p.m. in most establishments.

In comparison, his competition practices between five and 10 hours daily to prepare for the world championship. Knowing this disadvantage motivates him to focus even harder on his game.

“I want to be the world champion, so I can show other Indigenous people that it can be done,” said Haydar. “Maybe someone will say, ‘Hey if he can do it so can I.’ It can be anything it doesn’t have to be pool.”

Initially, he played 8-ball, but decided to learn 9-ball strictly for the competition aspect, but has grown to love it.

“It’s like playing chess, you have to always plan out your next three shots,” he said.
Last year, determination and natural talent earned him a second-place spot at the Canadian Junior 9-ball Championship, as well as an invite to the World Pool-Billiard Associations Annual Junior Championship in Moscow, Russia.

Although he didn’t do as well as he would have liked in Moscow, he did catch the eye of an elite pool coach from New York. The two communicate via video, which has helped improve Cappo’s game.

The only thing standing between him and the title are the funds to get to the competition in Cyprus, Europe next month.

Sponsorship is next to impossible, so his family is doing what they did last year and that is raising the money themselves. They have created the Haydar’s World Championship Bid GoFundMe page.

Despite the out-of-pocket costs, Cappo’s father Kamao believes it’s worth it.
“I told him I would do whatever I can to support him as long as he stayed away from negative influences,” said his father, Kamao.

The first thing he did was to purchase a pool cue from a pawn shop, which Cappo took to Moscow.

This year, things are different because not only is Cappo experienced and professionally coached, but he is focused.

He said meditation has helped him stay balanced because in addition to pool he also boxes, plays ball, runs cross-country and helps his dad operate a youth horse program.