Ahenakew’s soccer journey took her to the pro leagues 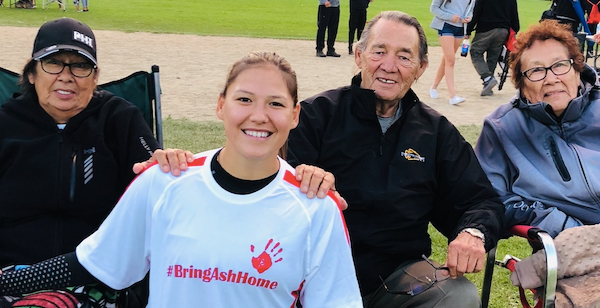 Kayla Ahenakew with her Grandma Judy Ahenakew, Grandpa Ray Ahenakew and Aunt Donna Ahenakew at one of her many soccer events. Photo supplied

At 28, Kayla Ahenakew is still living her soccer dream life.

The game she started playing at age five in North Battleford, and which drove her through high school and five years of varsity play, has now taken her to a professional soccer team in Peoria, Illinois.

“In the past six months I’ve created a business, and I finished school and now I’m about to play pro soccer. I feel so good,” she said recently from the Peoria apartment she shares with some of her teammates.

From the time she was little, Ahenakew loved kicking the ball, she “liked to be tricky, doing that kind of street-style soccer,” she said. She started playing in the Saskatchewan Indigenous summer and winter games when she was eight and continued through her teens. At 15, she played soccer at her first North American Indigenous Games (NAIG) in Denver.

Indigenous-organized sports events played a significant role in her development as a competitive player and introduced her to many Indigenous athletes. She played on eight FSIN soccer championship teams.

She also played in all the school sports and fell in love with TaeKwon-Do when she was 13, which took her to tournaments all over Canada until giving it up at 15.

Ahenakew has learned in adulthood that she has attention deficit disorder, which helped her understand why being active has always given her such joy, while sitting in class has always required full-on effort.

“I wasn’t the best kid… cause I wasn’t good in school, but sports and soccer has always kind of made me work hard toward that. Doing that gave me opportunities for good things.

“If I would get into the wrong crowd, or get into the alcohol, then I would go back to sports because that was what made me feel good and then I’d be doing good things.

“Having my grandparents’ support always put me back in there. That’s really what helped me keep going because if I didn’t have that support, I probably wouldn’t have got on the teams and got to go to the places I got to go to.”

Ray and Judy Ahenakew paid her enrollment fees, bought her gear, drove her to practices and to tournaments in Denver, B.C. and the Northwest Territories. At 16, she moved with them to Saskatoon, where she enrolled in the soccer academy at Centennial High School, which she saw as a stepping-stone to college play.

That year, one of her best friends on the team died by suicide. The loss was devastating. Ahenakew organized a team in memory of Kate Mountour, which raised funds to donate to suicide awareness and prevention programs.

Sadly, Ahenakew has known other Indigenous youth who have taken their own lives.

After graduating high school, she took a year to upgrade her English marks and the next year played college soccer with Lakeland College in Lethbridge, where she won Rookie of the Year.

The next year, she played with Hills College in Texas.

In 2015 she registered at the U of S, where she played the next three years with the Huskies -“We were the first team to make nationals in their soccer program, which was huge for them,” - and ended her five-year eligibility to play varsity sports.

During that time, she studied Education for one year, then switched to Kinesiology, which is a perfect fit for her.

“It was to do with sports and your body, with training and working out and physiotherapy. I was like, ‘man, if I know this stuff, I can help other youth become athletes.’ Or I could become a phys-ed teacher because that was the only thing I loved in school.”

“I found such passion for physical activity and what it does for your body and makes you feel. I love that.”

When the Huskies soccer season ended in November 2017, she felt worn out and left school, just before the semester final exams.

“That was me not relying on my support system, not listening to my mom… I wasn’t in a good place.”

She got a construction job as a labourer, building the Saskatchewan Hospital in Battleford. For eight months, she carried bricks and drywall, moved debris and installed bathroom fixtures. When she got laid off, she started thinking about what she wanted.

“I’ve always been a person who… made the goals, I would figure out what I had to do to get there… I always based my work on what success I would hit, what accomplishment I would get.

“I was thinking about my life and I (realized,) ‘I have to go back to school.’ I don’t like school. I’d experienced construction and I could have easily gone down that road and went into the trades, but I just had so much passion for things I wanted to do with my Kinesiology degree.

Back at U of S, with varsity off the table, Ahenakew played with local soccer teams. In February 2020, she started talking with a coach in Peoria about playing in the UWS, a national pro am league.

He wanted her to come there in May, but COVID-19 hit in March and the league was cancelled.

“I thought I was done playing soccer because I was 27. I was going to finish my schooling, start at square one, saving for a house.

She began a personal holistic journey that included therapy and healthy living.

“It’s been an awesome year… Once COVID hit us, even though it ruined my traveling and adventurous side, it really made me sit with who I am… my body and mind feel better. I like what I’m doing right now.”

In December, the coach from Peoria invited her to come for the 2021 season.

It was another chance to fulfill her soccer dream, but she hadn’t played in months.

“From then until now, I trained my ass off,” she said.

She trained five times a week and got into “wicked shape,” at the same time as she and three Indigenous women friends created Newo Wellness, a holistic fitness business. And she finished the final semester of her degree.

“I feel so good. I feel like I’ve worked so hard in these last six months… Even spiritually, emotionally, I worked hard.. I learned a lot about boundaries, my trauma, those unhealthy patterns that kept happening in relationships.”

Ahenakew spoke with Eagle Feather News from Peoria. She’s clicking with her teammates and looking forward to their first training game.

“I missed being on the ball and playing with girls.”

Ahenakew said she has often been the only First Nations player on a team and sometimes faced negative stereotypes and racism, even in the college sports world, but she doesn’t want that to stop girls who dream of college sports.

“I powered through because I love soccer and I believe I deserve to be there and I’m just as good.”