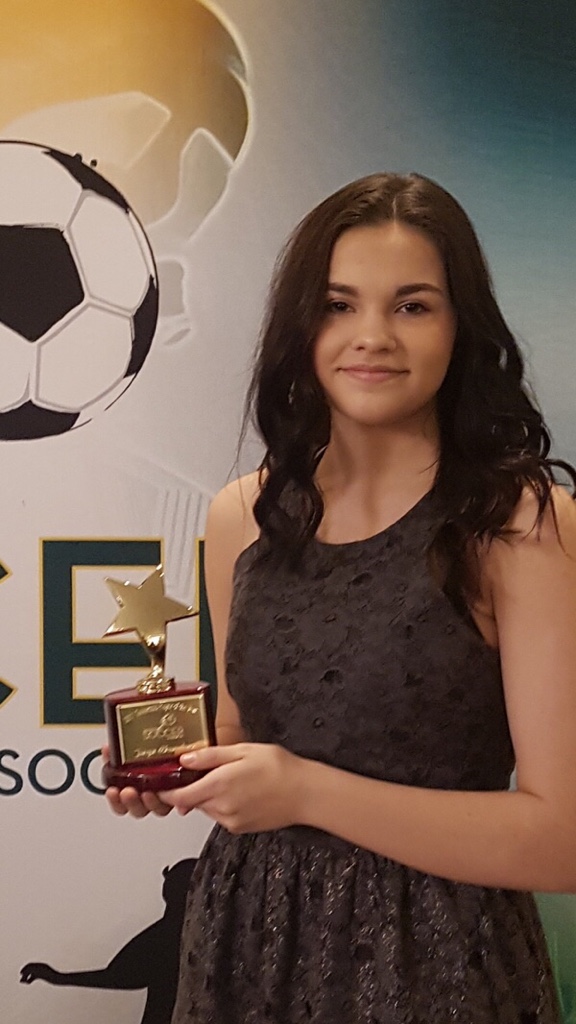 Teryn Ahenakew received the SSA Grass Roots Player of the Year Award – a recognition that took her by surprise. Photo submitted by Tara Tait.

A girl from a northern community received the Saskatchewan Soccer Association (SSA) 2017 Grass Roots Player of the Year Award for her passion in soccer. Teryn Ahenakew is a member of the Ahtahkakoop First Nation and has been playing the sport for four years. When she found out that she was to receive this award, she was left speechless.

“I was surprised and shocked,” she said. “I never won an award before. I was really excited.”

At 15-years-old, she has accomplished so much. Ahenakew helped contribute to her team’s success and values making an active contribution to the soccer community. She was part of the gold medal winning SUSC Hawks, who took the top spot in U16 girls at the SSA 6-aside Provincial Championships. Ahenakew earned her spot on Team Saskatchewan for the 2017 North American Indigenous Games (NAIG) held in Ontario where she had 5 goals for the tournament and was the leading scorer for the entire competition that helped her team earn a silver medal.

It is no brainer why her accomplishments were recognized through the award and said receiving it means a lot to her.

“I’m appreciative and very thankful that I won,” she said. “I think a lot of other people deserve [to win] it too.”

Although she’s in grade 10, she’s already thinking ahead into the future. She sees herself attending university after she completes high school and hopes to make soccer a professional career. The star player said she looks up to her mother who influenced her to play the sport a few years back. Before entering into the sport, Ahenakew was into singing and playing different instruments such as the keyboard, piano guitar and ukulele. Her newfound passion for soccer started when her mother took her to one of her games to watch and the sudden urge to play the sport was ignited.

The teenager with many talents and skills hopes people will feel inspired to keep working hard at what they love to do. Ahenakew found her calling with soccer and by receiving the SSA Grass Roots Player of the Year Award – it made it all more real.

“It all has to do with what I bring to my team and what I strive for,” she said.

The SSA Awards were held at the Saskatoon Inn on March 17th.