Big River athlete pushes his way to fourth at nationals

In his sophomore year at the University of Saskatchewan, Big River First Nation’s Brett Lachance qualified for competing in the CIS National Track and Field championships in the shot put competition. The competition was hosted by the University of Manitoba, and was held at the Investors’ Group Athletic Centre in Winnipeg, Manitoba. 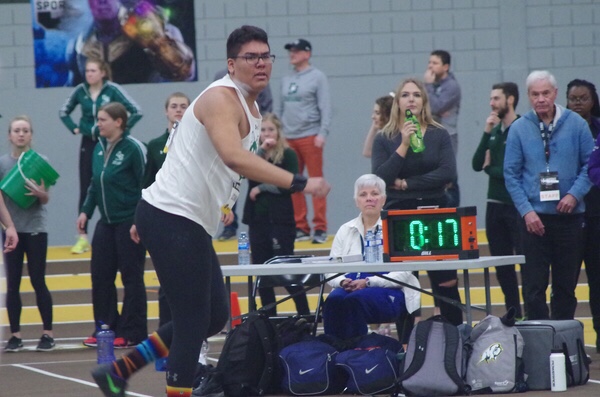 The first time he had the opportunity to partake in this nation-wide competition saw him placing fourth, which left an impression on the field. However, this is not what he sees as being the most important place to do this.

“I’m trying to do everything I can to help out with a positive image,” said Lachance after the competition was over. “I’m working with Saskatchewan Aboriginal Track and Field and that's helped me in a great many ways as well.”

When reflecting on his experience during the weekend’s competition, Lachance enthused, “It was absolutely incredible! I loved the atmosphere here, it’s nothing like I’ve ever seen before! I went to the Canada West championships, and that was a whole new thing this year, but coming to Nationals was even better!”

Lachance added, “I just love being here with the Huskies. We’ve come a long way this year, and there’s a bunch of guys here, not just myself, but others who have had breakthrough years, and I think with the nine of us, we all made some noise.”

Before making his focus in track & field and joining the Saskatchewan Huskies, Lachance was always involved in athletic competition.

“In high school, I was always an all-around type of athlete. I loved playing basketball, it is one of my favourite sports,” said Lachance. “I played soccer when I was younger. I played badminton a lot, basketball, volleyball...just all of the school sports. I just grew up with that rural mentality of trying to be an athlete.”

Advice that Lachance would give to any young athletes coming into track and field, or sports in general, was quite upbeat.

“You’re always going to get knocked down, but the most important thing is that, if you’re laying flat on your back, if you can look up, you can get up. Always have a positive mentality and try to do everything you can do to get up there, you know?”

Metis athlete Kieran Johnston was also competing for the University of Saskatchewan Huskies, and came away with the gold medal in the heptathlon. Congratulations to all of the Saskatchewan athletes at Nationals.