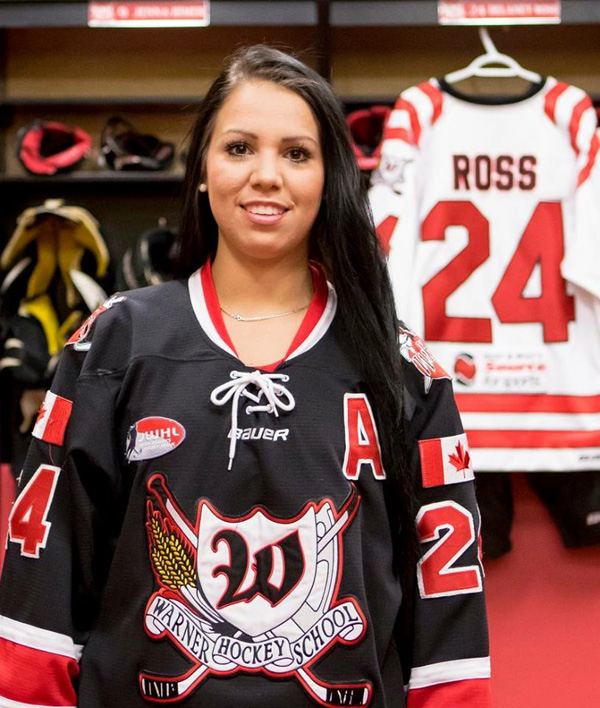 Ever since she put on her first pair of skates at an early age, she has loved the feel of the ice.

Seventeen-year-old Delaney Ross from Canoe Lake First Nation has been playing hockey since she was five years old.

“When I was little my dad took me out to skate and I’ve always loved it, so then it grew on me and it stuck with me” Delaney said about her hockey career.

At the age of 12, she joined the Midget AAA North Battleford team before moving to Alberta to join the AAA Lloydminister Steelers.

In 2013 at the Macs tournament in Calgary, Ross, a forward, played in four games in which she tallied seven goals and six assists for 13 points. Lloydminster won three of those four games while the female division was ultimately won by the Westman Wildcats

“We didn’t do so well, but I did well,” she says of her awards and recognition for her individual contributions to the team’s efforts and was presented with several honours.

In the same year, she set new record in her league with the Lloydminster Steelers as she broke the league record of 68 points beating it with a whopping 90 points.

Last year her and her family moved to Lloydminster, where she joined the Warner Warriors in the Junior Woman’s Hockey League (JWHL).

“She was voted on to the league all-star game where she was chosen as first star.  Her team also won the final league game which was played at the Buffalo Sabres arena. She was also the most offensive player after leading the league with most points,” says proud dad Marty Ross.

Ross has had some remarkable years in hockey. She hopes to continue to break records this coming hockey season. “I’m ready to go back and do it all over again,” said Ross.

She will be doing her grade 12 this year and though she does not know yet what she plans to do career wise, she will always want to play hockey.

“I just want to really play hockey and play in a university or college league. I’m not the smartest but I know school is very important in order for me to continue,” Ross said.

Ross hopes to one day play for Team Canada and possibly play hockey with an NCAA team in the United States.

“The team Canada coach comes to lots of our games so hopefully this year I get an invite,” Ross said.

She will still be attending Warner Hockey School this fall because she wants to excel in hockey. Ross says she will continue to work hard and do her best for her family, to succeed as much as she can as they have invested in her and supported her passion for hockey.