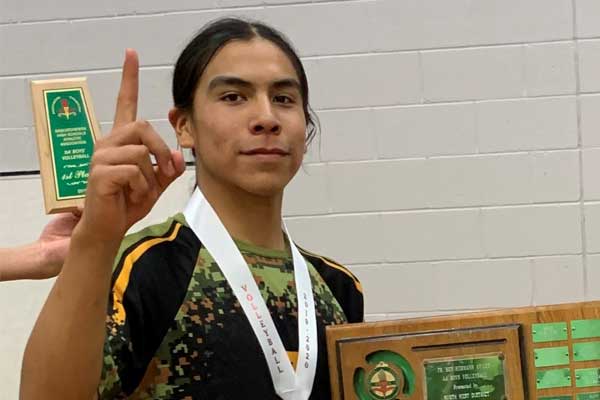 Askiy Walkingbear is joining brothers Thundersky and Ryzen on the Olds College Broncos Volleyball team for the 2020 season. Photo supplied

Olds Alberta-The Walkingbear family is a volleyball powerhouse. Thundersky Walkingbear and Ryzen Walkingbear both play for Olds College Broncos men's volleyball team out of Olds, Alberta. The school plays in Canada’s top ACAC volleyball league. In the fall of 2020, their younger brother Askiy is joining them on the team after excelling at Thunderchild High School and with his club team, the “Thunderchild Thunder.”

“Firstly, I am very honoured that pursuing my career and sports aspirations came through hard work, success in academics, and as an Indigenous student becoming a proud Broncos Volleyball athlete competing in Canada’s top ACAC volleyball league,” said Askiy who is also enrolled in Animal Sciences/Sports Management. “Joining my two older brothers in the Olds College Broncos volleyball program will also be an exciting opportunity to excel our individual and collaborative team play next season which I am preparing to contribute to the Broncos team.

Head coach Ryan Marsden is excited about the season and to have the three brothers together. “With our team having many players returning from last year we are in a really good position to continue to move forward,” Marsden explained. “With the addition of these recruits, we expect to be even more competitive by thinking about building towards the future. We are lucky to have the new players coming in that we do. Askiy is such an offensive weapon. He has such a strong net game and we are excited for him to contribute to this area. He has won two back-to-back Provincial Championships in Saskatchewan and knows how to win.”

Askiy stands 6’2 and like to be outdoors a lot. He has a healthy respect and rivalry with both his brothers. “In teasing my older brothers, I let them know that they both brought to the court the ‘jump kill leaps’ but I’m coming to join the Olds Broncos with our ‘family stone hammer’!”