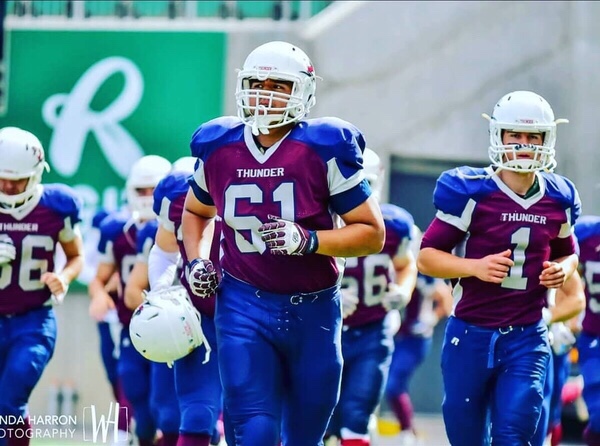 Damon and Rory Iron participated in the Regina Thunder’s spring camp in May. Some sibling rivalry may be seen on the field this upcoming season but are both looking forward to playing together. Photo courtesy A. Iron.

He took note that Damon’s size and strength and thought he had the tools to be offensive lineman. He also took into consideration that their scout at St. Mary’s, John Germs, talked highly of Damon’s character.

The Regina Thunder decided they wanted Damon and after inviting him to camps, he was offered a spot on the team.

Damon’s interest in football started as a kid watching the Saskatchewan Roughriders play with his mom. After noticing how enthralled he got watching the game, she asked if he wanted to play. She put Damon in a Roughrider camp in Prince Albert, and he was hooked after the first few practices.

Damon, now 20, has now been playing for eight years and is going into his fourth season with the Regina Thunder.

“I didn’t think I would play football after high school,” said Damon. “But after hearing the Thunder wanted me to come out, I got pretty excited and fell in love with it again. So, I decided to give it a shot and it was one of the best decisions I ever made.”

Damon is thankful for his time with the team.

“The Thunder is a great team to be with. I’ve learned about life, football, and becoming a man, in one year playing with the Thunder than I ever did in my whole life. It taught me hard work, perseverance, to never give up. It taught me a lot and I’m thankful for it,” he said.

Rory Iron’s interest in football started after his mom and brother introduced him to the sport.

“From the day they signed me up I fell in love with the sport because its fast, physical, full of opportunity and obstacles to overcome,” said Rory who has now been playing for six years.

At 17 years of age, Rory who is a defensive back, was eligible to participate in the Thunder’s winter and spring camp. After doing well in the camps he was signed to the team.

“I was excited but I still got to know that this isn’t the end and there is still work to be done before the season,” said Rory about signing, but knowing playing CJFL level comes with harder plays, a new playbook, and new teammates.

Macauley has high hopes for Iron brothers this season.

“Rory, he’s got a solid raw skillset that we feel we can adapt and change him to the type of player we want. One thing is that he is very fast he’s a guy who can really get around the field quiet well,” he said.

Macauley expects this will Damon’s year to really show his skill set.

“We expect Damon to be coming in this year and being a starting offensive lineman. We expect him to just come in and dominate that position,” said MacAuley.

Although there may be some sibling rivalry at times the brothers are excited to be playing together and hope to help their team to this year’s CJFL championship.