Tansi, Edlanete, hoping your fall is going awesome and you are staying active. That you found some time during the week around Remembrance Day to give thanks for all that we have as a direct result of our WW1 and WW2 veterans. 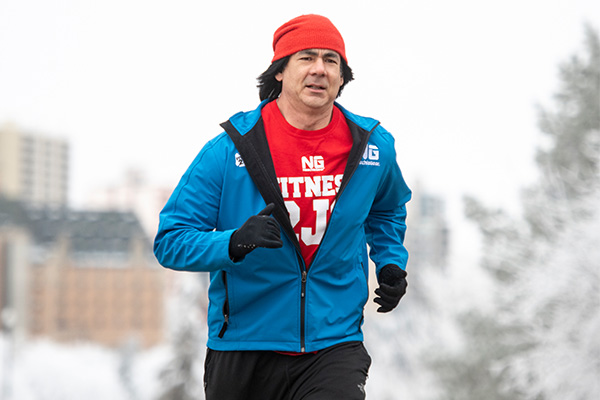 Recently returned from a week long programming in the community of Canoe Lake Cree First Nation.  A big thank you to Students and Staff from the Mikisew School, and community members, who participated in the functional fitness Bootcamp sessions and self defense for women and youth programming.  Proud of the consistency of the evening crew who just never gave up!  This was the first time Coach Beans and I had been to the community of Canoe Lake, and we look forward to coming back.

Over the years of fitness programming I have met some incredible people who have battled through Diabetes and weight challenges; cancer; physical and mobility challenges.  I have written some articles in the past about their journeys that I have had the honour to share with them.  I truly believe that everything happens for a reason; and people, places and things come into our lives and cross our paths as it is meant to be.

I received an email from one of the participants from the programming in Saskatoon.  He wanted to let me know how much he appreciated the 2J2 programming;  the safe community sessions that he and now his daughter are involved in.  I asked Dave if it would be all right if I shared some of his letter with the readers of Eagle Feather, as I am so grateful to be a part of Dave’s journey to healthy and positive lifestyle.

“I suffered a major heart attack and head injury just over three years ago.  Determination and drive kept me going, at first just trying to get myself as healthy as I could. It was while doing this I set my sights on playing hockey again. Just over a year ago that dream came true for me. Slowly I trained walking on a treadmill, then light jogging, I was blown away at how good it made me feel! It was right at this time I saw Fitness 2J2 programming, I asked if I could join in with the run club last winter, and Joel said of course you are welcome.  Just want to say it's done so much for me in all aspects of life. This I can never thank you guys enough for putting these programs on, accessible for everyone at no cost. I feel so inspired after classes and thankful!  Now my daughter and I both attend the functional fitness and the run club.”

“Three years around this time y my life was almost taken, still tears me up thinking about it, not because I almost was gone but the pain and suffering my friends and family went through. What happened to me is seen through the eyes of others. I can recall some of the day it happened, it was a Sunday I talked to my younger brother on the phone where we planned to play a game of Road hockey with the guys we've been playing every Sunday for years. We started playing normal like every other time before, the goalie saw me stop running for no reason and I just fall straight back. At this point I struck my head on the asphalt, the blow cracked my skull and caused internal bleeding on the brain. He then rushed to me; at this point he yelled to the other guys " He's not breathing, he's not moving”.  By chance the goalie had just finished a First Aid coarse that Friday, so he knew what to do, he started CPR and rescue breathing called for a ambulance. There was a ambulance was near by, and within moments arrived at the scene where they hit me with a defibrillator, restoring my breathing rushed me to the hospital.”

“In hospital I was in critical condition, the problem was in order to treat the heart they needed to thin my blood. In order to treat the brain injury they needed to thicken the blood. They had no answers and at that point felt I would have no chance of pulling through. They informed my brother to call a preacher and gather all family for they were going to lose me. They told the family they would try stabilize me and keep me alive as long as they could. Three of four days went by and in the early hours of the morning I started to wake up.”

“Coming out of coma, hearing a beeping noise I thought it was my alarm I opened my eyes, only to feel a tube in my nose and mouth. Thinking my nephew was playing a trick on me I started to get up, then the pain hit. When I looked over and realized the beeping was hospital monitors and I was in the hospital. With no clue how I got there or what happened. The nurse at this point calmed me down, informed me I had a heart attack and suffered a severe head injury, That morning after talking with the doctor, he looked me and said “you’re a miracle and that I have higher powers looking out for me cause we shouldn't even be talking. He said you should be dead at the worst or at the best have brain damage”.

“A month in hospital and two surgeries later I made it through the critical part and my second chance on life began. Not a day goes by that I don't feel blessed to be here and thankful for life. Every time I see the doctor he looks at me in amazement and says “how strong with such a lust for life I have is unbelievable, a true miracle “. Really I just feel like a normal guy now, one who has faced adversity and given a chance to live again.  Being active with the thanks of programming of Fitness 2J2, I can again put my stick on the ice and be active”

Grateful for David and his empowering and inspiring story of determination and commitment, to live a healthy and positive lifestyle.  I am so proud and thankful to know that David chose to join us at Fitness 2J2, and that we are apart of his journey.  How often we take life for granted, how sometimes it takes a life-shattering event for us to choose to climb over obstacles that we once thought prevented us from living fully.