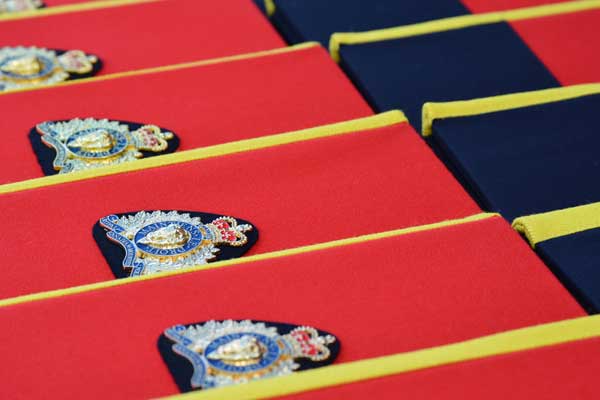 Cases that hold the 40 Eagle Feathers that will soon be available in detachments across Saskatchewan.

Eagle feathers will soon be available in RCMP detachments across Saskatchewan for Indigenous people to use in swearing oaths, affirming statements or to provide comfort.

Providing the symbol of Indigenous spirituality to police detachments is a sign of respect, Saskatchewan Lieutenant Governor Russ Mirasty said in an emailed statement.

“(My wife) Donna and I were honoured and very pleased to be invited to take part in the recent ceremony at RCMP "F" Division in Regina, when an Elder, officers, and Indigenous leaders gathered to bless eagle feathers for use at detachments. The eagle feather is an important sacred symbol for many Indigenous people, and I'm grateful that the RCMP is working towards including Indigenous cultural traditions – this is a great sign of respect,” he said.

Following Indigenous protocols, the Ministry of the Environment gave Elder Howard Walker 40 eagle feathers, which he prepared before a handover ceremony, held June 21 at RCMP headquarters in Regina.

There, Howard taught Saskatchewan RCMP Commanding Officer, Assistant Commissioner Mark Fisher and Superintendents from Central, North and South districts about the eagle and use of eagle feathers.

The ceremony made the RCMP holders of the eagle feathers and it will be their responsibility to ensure local elders, ceremonial holders and a district officer train detachment staff in their proper use and care.

“We want our detachments to build relationships with local elders local ceremonial people,” said Sgt. Pelletier. “In the future we want to make sure they're involved with everything with the eagle feathers.”

Local protocols surrounding the use, care and handling of eagle feathers will be adhered to. This will require detachments to build relationships with local elders and ceremony keepers in their regions.

“Every nation is different [so] that relationship is important when we're dealing with having eagle feathers in our care,” said Sgt. Pelletier.

The eagle feathers will be housed at detachments, each in its own case, along with a Saskatchewan Ministry of Environment permit and the use policies, which are being finalized.

Local artists are being sought to create beadwork for the feathers to represent the different Indigenous Nations in the province.

“It’s time to be able to have the Métis, First Nations, RCMP and governments start working together and start being one voice as Canadians … The eagle feather and the ceremony shows us that and that we have to think as one and respect each other. We have to think as one people,” he wrote.

Eagle feathers should be available in September, Pelletier said.