It was a very sunny Sunday afternoon and many, many rodeo fans who made their way to the Stampede grounds were there to pay their tribute to one of the greatest chuckwagon racers ever at the Calgary Stampede, Ray Mitsuing.

In talking to some of the many people in attendance, a couple from Merritt, British Columbia, John and Brenda, heard about Mitsuings’ final ride and just wanted to be there witness it in person. “We’ve been coming to this event for many years and we weren’t about to miss this weekend for anything else. We wanted to witness the retirement of Ray Mitsuing and wish him the best in his future.”

Ray Mitsuing has accomplished a lot in his 65 years of public life as he was elected as Chief of Loon Lake First Nation in his home community in northwestern Saskatchewan. Currently, Mitsuing serves as a Senator on the Board of the Federation of Sovereign Indigenous Nations (FSIN), which represents 74 First Nations in Saskatchewan.

For the past 43 years, he has driven a school bus and acted as a mentor to First Nations youth, teaching them how to respect and care for animals.

The sport of sport of chuckwagon racing has been good to the Mitsuing family and Ray has certainly become one of the most well-respected drivers in the business. Mitsuing has set a record for Canadian Professional Chuckwagon Association titles with seven prestigious championships. 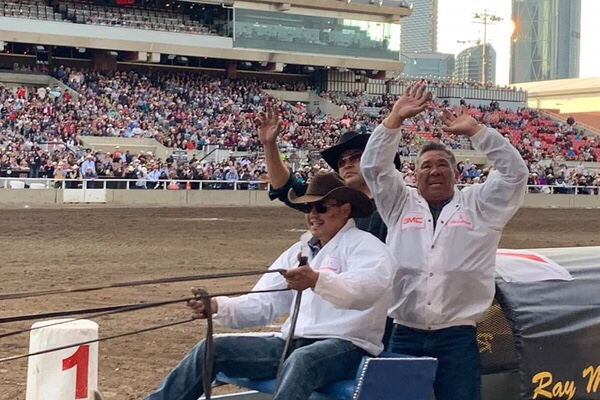 Mitsuing looks back to the early 1980s as he has been loading up his outfit and making miles in travelling to across Western Canada in hopes of placing so he can win some money to continue to support his family.

In 2019, Mitsuing has the best chance to win the most coveted prize from a 10-night battle at the Calgary Stampede.

“That’s the ultimate show in the world,” Mitsuing said on a quiet afternoon, before his final ride on Sunday afternoon. “That’s the best one . . . that’s the one you’re always shooting for, to try and win.

“It is tough to win here. There are a lot of tough wagons there and you have to have lots of breaks and have everything go your way to win that one, you know?”

Mitsuing first made the final four dash in 1988 and has been there three times since. In 1992, he won the Stampede aggregate — the best total time (penalties included) over the first eight days, which now awards the winner a new truck and the Richard Cosgrove Memorial Trophy.

But in his decorated racing career, he has never been on the stage hoisting the championship bronze on the final night of the GMC Rangeland Derby...yet.

“The Calgary Stampede is where all the top wagons get together, from both associations from the CPCA and the world,” Mitsuing said. “Both associations are represented and the best they’ve got, and the Stampede is the one you want to nail . . . that’s the one I’m after.”

“You need luck, lots of luck to win. And good horses. But luck is the biggest thing. It’s the luck of the draw all the time, the conditions have to be right, everything has to be right to win that one,” added Mitsuing.

Even though he may be getting up in higher numbers with age, this doesn’t mean that Ray has slowed down one bit as he still has his blood pumping to compete with the fastest and the best in the sport of chuckwagon racing. 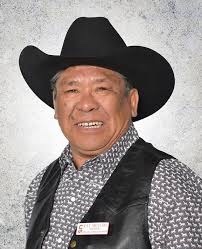 After his 36th consecutive Calgary Stampede, Ray Mitsuing is retiring from chuckwagon racing, but says he won’t be too far from the sport. Photo supplied

He proved just that on Friday (July 12) by winning Heat 6 aboard his Border Tribal Council wagon. His time of 1:10.38 stood up as the fastest clocking of the night to win him $6,000 in day money.

As the Stampede-enforced rule for safety reasons and competition, retirement is forced upon drivers at age 65.

This will mean that the 2019 Calgary Stampede, Mitsuing’s 36th consecutive Stampede is his last ride at the Greatest Show on Earth. He has become a legend at the race track and certainly done very well with numerous accolades to his credit.

Mitsuing is joined at this year’s 10-day show by two of his sons. Dale, who captured the CPCA title last year in his rookie season, will be doing a demonstration run, while Devin, who competed at Calgary in 2012 and 2014, will also be close by.

When it’s all over and done, Ray plans to sell a few of his horses privately and the remainder he’ll sell to his sons, who’ll continue racing. Mitsuing won’t be far, however, as he plans to help his boys, doing some coaching and breaking horses.

“And whatever else needs to be done,” he added with a smile.

When you still feel as fresh as your horses, forced retirement is emotional.

“I’ve come to terms with it but, still, at the back of my mind, it probably won’t hit until the Stampede is over that I won’t be coming back again,” Mitsuing said. “It really hasn’t sunk in yet.

“You can think about it all you want but it’s never the same until it’s time.”

Mitsuing, who is coming off a big win at Wainwright and sits narrowly behind Dale at fourth in the CPCA standings, believes that 2019 is his best chance to win the Rangeland Derby at the Calgary Stampede.

Here comes Sunday and Ray Mitsuing getting set for the ride everyone has come to watch. He is well prepared and horses are all psyched up to go for it.

Ra Mitsuing closes off his Stampede career by winning heat 6 with a time of 1:11:37

Rangeland Derby won’t be the same again without having Ray Mitsuing flying around the track at the Calgary Stampede.

Ray Mitsuing, thanks for your 36 great years at the Rangeland Derby. Great memories!