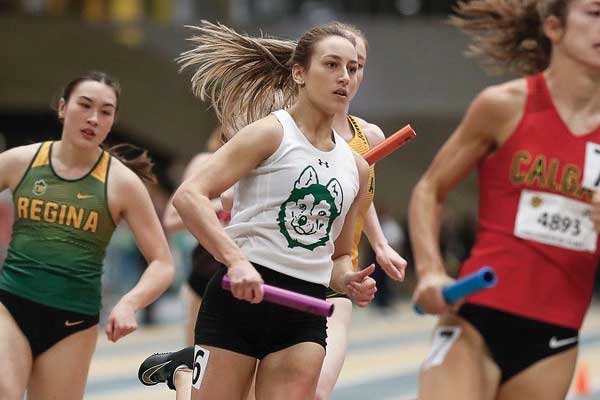 Two spheres seemingly unrelated – biochemical engineering, and track and field – but for standout University of Saskatchewan student-athlete Kendra Farmer, her application to the former may in part explain her excellence in the latter.

“In track, you're able to measure just how much better you're getting. In team sports, you can't always track that improvement, so the measurability of it is fun.”

“I never made that connection between track and biochem (engineering),” laughs Farmer. “But one thing I like about both math and science is how exact answers are. There's no grey area. And that's very much like track, so perhaps that explains my draw to it.”

In almost no time at all, the Saskatoon-born Metis athlete has made quite a name for herself in western Canadian track and field. In 2018, Farmer won the Patricia Lawson Trophy for U of S female rookie of the year after winning a silver medal in the 4x400 metre relay, bronze in 4x200 metre relay, and fourth place in the 300 metre race at the Canada West Championships.

After collecting a couple more silver relay medals last year, Farmer and the relay team won gold in both the 4x200 and 4x400 races at Canada West this year. Farmer won silver in the 300 metre race, for which she is now currently ranked sixth nationally, and qualifies for nationals in both the 300 metre race and long-jump.

“Track and field is my love and passion right now,” said Farmer. “In my first year, I was a bit overwhelmed with the track and classes. But I'm balancing and extending my degree to control everything that's going on. There's still a lot of long bus trips spent on the computer doing assignments.”

In addition to school and track, Farmer makes time to give back to her community. After getting involved with Running Wild and the Saskatchewan Aboriginal Track and Field Championships (SaskATF), Farmer became a coach for the North American Indigenous Games (NAIG). She will take a group of under-16 girls to compete in Halifax this summer.

“When I started coaching last year, I noticed how they started to open up and evolve. Watching that made me realize (what) a difference track and field, and being part of a community, can make in a person's life.”

Farmer said she feels NAIG plays an important role in Indigenous and Metis athletics, because it helps foster interest in communities that may not have track and field.

“Every time I hear young athletes talk about NAIG, they talk about how many memories they've made and how it's been one of the best experiences for their lives,” said Farmer. “For me, track has helped me gain so much more confidence. So I hope this is one of those opportunities (for youth) where they can go out and be part of something bigger than themselves.”

Growing up, Farmer said she wasn't particularly immersed in her Metis culture. But after getting involved in NAIG and SaskAFT, she's begun to connect more with her background and culture. It's just one of the many benefits that has sprung from dedicating herself to her vocation.

“It's been rewarding being involved in SaskATF and NAIG. I've been around my culture more and started to understand what it meant to be Metis,” said Farmer. “It's helped me celebrate who I am.”