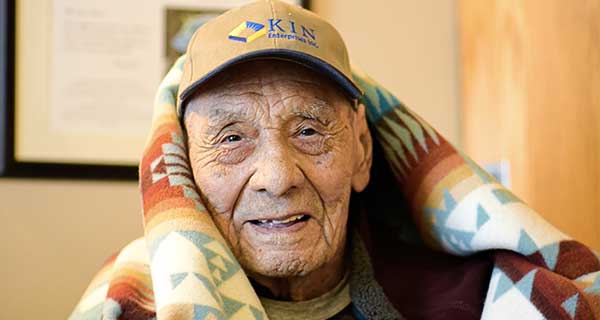 A man with many accomplishments from the Muskeg Lake Cree Nation celebrated his 100th birthday this year. Elder and residential school survivor John Basil Lafond turned a century-old on March 20, 2020.

As a young man, Lafond worked as a logger and worked in the bush a lot. In his mid-20s, he built his own cabin at Crystal Lake in Manitoba. He worked as a driving instructor, a Cree interpreter, a court worker where he had good relationships with the circuit judges.

He hunted and fished to provide for his family and also traveled by dog sleds while residing in Pelican Narrows. Lafond and his family lived amongst the Catholics and Protestants in separate villages.

“That was kind of a culture shock for us because as kids we [didn’t] know what separation and colonization was,” said Lafond’s youngest daughter, Grace Lafond-Barr. “But my dad associated with all people.”

During his years in residential school, Lafond was beaten with a horse harness by one of the caretakers, which resulted in a brain injury. That injury still effected him decades later.

“They operated on him in 1969 because I remember I was 10 years old when I remember my dad going into RUH,” recalled Lafond-Barr. “They drilled holes into his skull to relieve the pressure.”

Lafond overcame hardships and worked to help First Nations people. He was one of the people who started the Native Alcohol Centre, which is now known as the Metis Addictions Council of Saskatchewan located in Saskatoon.

“I never [saw] my dad touch alcohol. He told me the year I was born, he quit drinking,” said Lafond-Barr. “When he was telling me this, I was already around 30 years old. He had multiple jobs to help First Nations people…he stood up for the rights of First Nations people.”

“He’s an awesome dad. I’m very proud of my dad of everything he’s accomplished,” she said.

“He [once told] me ‘I’m not ready to go yet, I’m not sure when I’m ready to go.’ Every week, when we have our phone call, it’s a blessing for me,” she said. “He’s still very aware of himself and has a clear mind. He can talk to you about the history of Muskeg Lake, who married who, etc.”

The Lafond family and the Muskeg Lake Cree Nation had planned a community celebration for his birthday with a big supper and old-time music and jigging but the plans were cancelled because of the Coronavirus. The family celebrated with a small gathering in March.