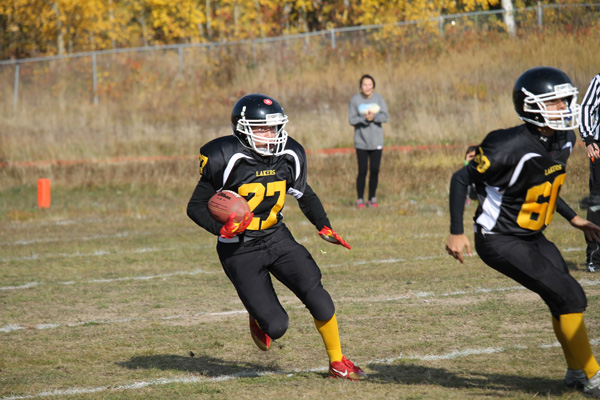 Pinehouse Laker #27 Dray Tinker following the block of teammate #60 Malachi Misponas. Dray scored four touchdowns to finish with 12 on the season, despite being one of the smallest players in the league.

Northern Saskatchewan Football has had a fantastic fifth and final week of action.

On Tuesday, September 29, the Beauval Voyageurs clinched a playoff sport as a 2A team with a 79-6 victory over the visiting La Loche Lakers. Leading the Voyageurs was Don Campbell who scored four touchdowns.

On Thursday, October 1, two games were held in Northern Saskatchewan. The first game was in Sandy Bay where the hometown T-Wolves defeated the SMVS Huskies by a score of 27-13. One touchdown each was scored by Fabian Morin, Leo Charlette, Storm Bear and Keaton Morin for Sandy Bay. The second game was an exciting match between the host Creighton Kodiaks and La Ronge Chargers. The Chargers held a 20-14 lead at half time but a few Charger fumbles in the second half, and a determined response by the Kodiaks resulted in a final score of Creighton 46 La Ronge 27. Tyler Williamson led the hometown team to victory with three touchdowns.

Playoffs are determined by SHSAA school size rather than region this season. For six aside football, the smaller schools are 1A while the larger schools are 2A. In the playoffs, the 3rd ranked team will play at the 2nd ranked team in each size category. The winner of that game playing the first place team for the Ralph Pilz Trophy in Prince Albert on October 17, 2015.

This week, on Tuesday. October 6, 2015, the Beauval Voyageurs travelled to Cumberland House in the 1A semifinal. On Thursday, October 8, the Pinehouse Lakers are travelling to la Ronge in the 2A semifinal.