The sport of lacrosse is taking over interests in the community of Standing Buffalo Dakota Nation.

Brandon Yuzicappi, 17, has been playing for the Standing Buffalo Fighting Sioux lacrosse team for almost 11 years and is glad he found something he is good at.

“I really liked it and I fell in love with the game after that. I didn’t want to stop,” he said. “I like the physicality and the adrenaline of the game.”

Yuzicappi practices with his team once a week but on his own time, he trains three times a week in his community along with his friends. When it’s not lacrosse season, he’s playing volleyball. He said since keeping himself active by participating in sports has helped him kick boredom and to live a healthy and positive lifestyle. 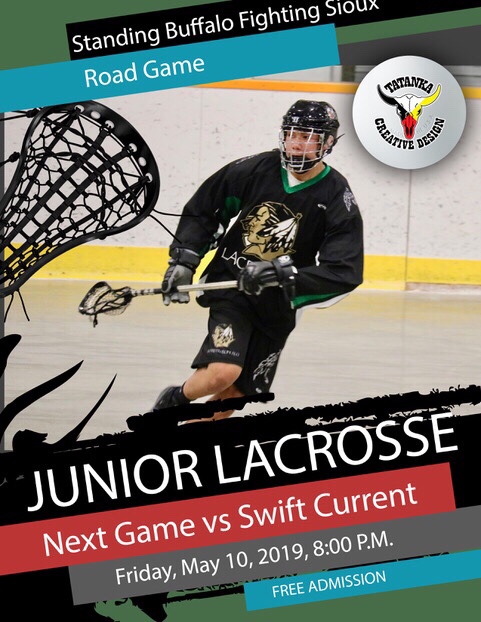 Brandon Yuzicappi plays forward with the Standing Buffalo Fighting Sioux lacrosse team. He loves to play the sport for the adrenaline of the game. Photo supplied

“It keeps me busy and keeps me away from [drugs and alcohol]. It doesn’t get me into any kind of trouble,” he said.

Yuzicappi graduated high school this year. He hopes to get into business in university and also continue playing lacrosse on the side.

“I want to keep playing as long as I can,” he said. “It’s a great game, I hope more people can get into it and play it to see how game changing it is on how it can make an impact on your life.”

The Chief of Standing Buffalo Rodger Redman travels around with the different teams from his community to various lacrosse games and tournaments to show his pride and support.

“We have five teams from my community…a lot of our kids love the game and the program and it’s doing wonders for our community,” he said. “It brings our communities together and it’s a great feeling to see our children out there engaging in this sport.”

Chief Redman added they put a lot of money into the lacrosse program in his community.

“We support our kids. We buy them helmets, bags, gloves, sticks and equipment to provide all that to them,” he said. “We see the results with the smiles on the parents faces. It builds self confidence for the kids and teaches them to interact within the sport and the spirituality is also key because it’s the Creator’s game so we really honour that.”

He explained why it’s called the Creator’s game, in reference to the Six Nations Iroquois who was given this traditional First Nations game that came to them.

“It’s very spiritual and there’s a lot of teachings within the game and we’re finding that out within our community,” he said. “We honour the game and the components. We teach our kids to be respectful and to take pride of where they come from.”

Russ Matthews is the Director of the Lacrosse Program at Standing Buffalo Dakota Nation. Over 10 years, he said he has seen over 200 youth come through their program. Right now, they have 75 youth enrolled in the five divisions.

“We’re the only First Nation that I’m aware of in western Canada that has a full slate of lacrosse teams registered under the provincial governing body and under the Canadian Lacrosse Association as well,” said Matthews. “We really broke the ground. We’re the first to have a Jr. lacrosse program registered on the prairies.”

The teams are mainly composed of Standing Buffalo band members with a few children from other First Nation communities. The youth have been practicing at school in the gym as part of their regular Phys. Ed. program and after school lacrosse practices and camps. Standing Buffalo has been playing lacrosse for 10 years and have won numerous city provincial and international championships.