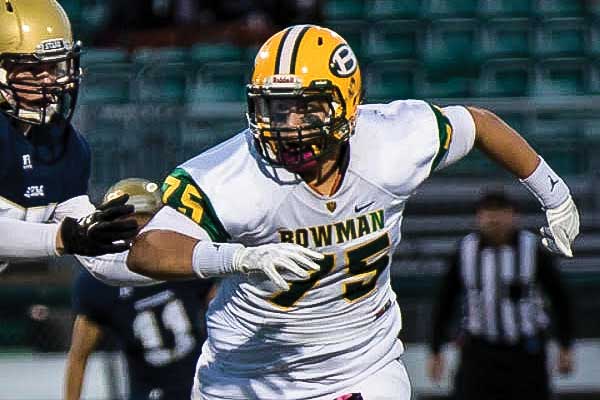 A young man from the Pasqua First Nation is living his dream by playing college football and hopes to give back to the sport by becoming a coach or a trainer someday. Photo by Mark Kays

Allan Lafond says one of his biggest achievements was being recruited to play college football at Dalhousie University in Halifax.

The 18-year-old defensive lineman from Pasqua First Nation grew up watching football, but he didn’t get serious with the sport until high school. In 2018, he made the top 100 player list for Football Saskatchewan, the provincial governing body for amateur football, and travelled to Texas for the sport.

“My family and friends always said I had the body type for football. As soon as I started playing, I just fell in love with it right away just because of my size,” Lafond recalled.

Lafond felt inspired when he was nominated by his high school coach in 2016 for 6 Nations Elite Development Camp, a First Nations camp to showcase talented football players from throughout the province. He would be nominated for four years until 2019, but he would attend the first three years.

“Whenever I went to [other] high school football camps, I was probably the only Indigenous kid there and just knowing that there’s not many Indigenous football players, that’s what pushes me more,” he said.

Lafond made a highlight tape in his senior year and posted it on Hudl, an application for players to upload stats and videos to get scouted. Coaches from Dalhousie University saw his film and got in touch with him about the recruitment process.

“He's a soft-spoken humble young man, works hard, a good athlete, serious about training and his school, always showed up to practice, meetings and was ready to work all the time,” Haggett said. “[He] would take a bag or cones and he would be doing drills off at the side. His work ethic, out of all the stuff we had to ask him to do, he went over and above and always did extra.”

Lafond said his physical efforts led to him feeling strong and healthy. In 2019 he was selected as a Football Saskatchewan all-star for his senior year in high school.

Lafond’s support came from his mother and his older brothers. During his senior year in Saskatoon, his older brother took him to practice and gym sessions. Although Lafond recalled that it was difficult being away from his family, but he would focus more on his studies, becoming independent and the sport.

“I didn’t want to get too lazy or slack off so I tried to use all my time as best as I could on studying the game of football and I just became obsessed with the sport,” Lafond said.

He noted that he would distance himself from distractions and would only associate himself with people that would share his goal or mindset.

“I needed to find people that wanted to do the same things as me,” he said.

Lafond hopes to become a starter and intends to major in law or kinesiology.