A well-known flute player from northern Saskatchewan is beating the odds during his recovery from a stroke and is learning of many strengths he did not know he had.

Jason Chamakese from the Pelican Lake First Nation is a successful Native American flute player and recording artist – a passion that grew over 21 years. He released his first album in 2007 and since has been nominated for numerous awards and won the Canadian Aboriginal Music Award for the best traditional flute in 2011 for his album called ‘Native American Flute Songs Vol.2.’

“I think Native American Flute Music is the most beautiful and relaxing music out there,” said Chamakese. “If I can bring those good feelings to people by my music, then that gives me more drive to get better.”

The flutist has self-taught himself to play since 1998 by listening to older flute albums where he learned to play along.

“All the flutes that I own have been given to me as gifts. My main flutes are made by a maker named Bryan Towers and a few of the flutes I have are one of a kind,” he said. “Though I do have a few other flutes from other makers. My latest album uses Bryan Towers’ flutes exclusively.”

Chamakese enjoys participating in his cultural ceremonies and is also a fluent Cree speaker and takes pride in speaking his language. In fact, he was amongst Earl Wood, Clarence Iron and John Chabot, all fluent Cree speakers who made history earlier this year when they broadcast an NHL game in the Cree language – a first in NHL history. 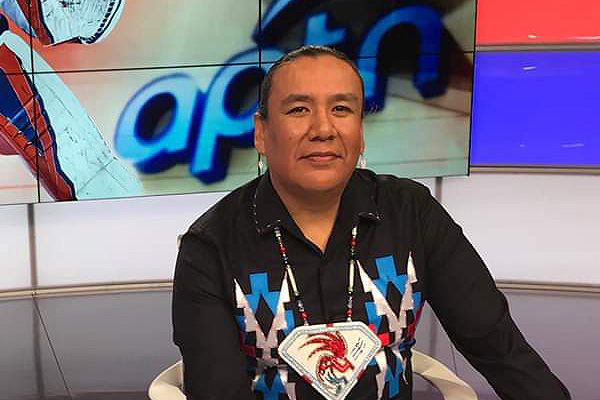 “I knew that it was a historical event that we were a part of. I thought that it would be interesting to maybe mostly Cree speakers but what I found later is that many Indigenous households throughout Canada tuned in to watch the game,” said Chamakese. “It made my family and many of my friends proud and it certainly made me proud. All of the languages Creator gave us are beautiful to listen to and to speak. I think that the most important emotion that hockey broadcast evoked was one of pride and I hope that it got people into thinking about re-invigorating their languages and passing it on by teaching it or learning it.”

Prior to making history, Chamakese faced a health scare where he had a stroke in 2015 that caused him to be put on life support. He he later suffered from short term memory loss, reduced mobility and even had to be spoon fed. He said it’s been a long process but realizes that he has come a long way.

“I had to learn patience and it does get frustrating when I still struggle with short term memory problems,” he said. “I have come a long way though: no more life support, no more induced coma, I can walk again, I’ve regained mobility.”

Through his recovery, Chamakese has learned that it’s the simple things in life that matter the most. He wakes up every day and is thankful to still be alive.

“Making coffee is living life to the fullest. I could be on a plane flying out to a performance or waking up and cooking breakfast for my parents, Maggie and Isaac, it’s all something to be thankful for,” he said. “Being healthy is true wealth. We can have a full wallet, a nice house and car but these things we take for granted, like walking and running or taking out the garbage are what makes us wealthy. I learned that I have a strength that was put to the test and it’s stronger now than it’s ever been.”

Over five years in the making, Chamakese released a solo flute album which is the third volume of his traditional flute music called “Nisto.”

“I wish everyone well,” he added. “Pray and be thankful that you have been given your second shot at life because many people aren’t afforded that gift of life again.”