Former NHLer takes his story to the stage 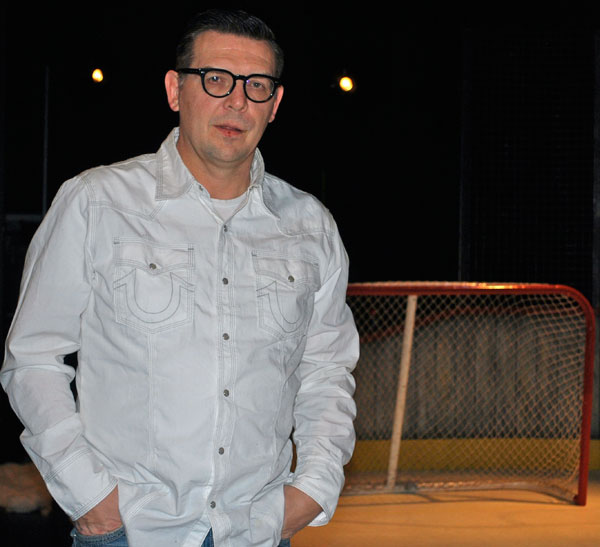 You could say at one time Theoren Fleury liked to burn the candle at both ends.

In his heyday during the 1990’s and early part of the millennium, the feisty right winger was one of the best players in National Hockey League making stops in Calgary, Colorado, the New York Rangers and Chicago.

However, Fleury was also well known for his excessive behaviour off the ice with serious addictions to drugs, alcohol and gambling.

Clean and sober, he co-wrote the book Playing With Fire with Kirstie McLellan Day in 2009.

The autobiography tells of Fleury’s humble beginnings growing up in small town Manitoba and his drive to succeed, which led him to being one of the top players in Junior hockey and later the NHL.

The book also documents the sexual abuse he suffered at the hands of former coach Graham James, his struggles with addictions and quest to find himself after he retired from professional hockey in 2003.

Playing With Fire was eventually made into a documentary and now it is has been made into a one-man play starring Shaun Smyth as Fleury.

In the production, Smyth wears skates for the duration of the performance moving around on a simulated hockey rink with a synthetic like ice surface.

It was Fleury’s idea to turn the book into a play and he says wants to share his story with as wide an audience as possible in the hopes that others who have suffered similar traumas will feel comfortable sharing their stories as part of a healing process.

“I think if you take all of the hockey out of my story, I’m telling the majority of people’s stories who suffered some sort of childhood traumatic experience. I lived with my secret for 30 years before I told it and I’ve had guys in their 80’s come up to me and tell me their story for the first time. So, the more we put the story out there, the more ‘me toos’ we get, the more empowered people we get, the more advocates we get and then change will happen.”

Fleury says his healing process is ongoing and he has come a long way in dealing with some of the anger he had when he wrote Playing With Fire almost seven years ago.

He adds a big part of this healing process has been rediscovering his Métis heritage.

“Where I have found a lot of my healing is in Aboriginal spirituality. I’ve been to 130 First Nations communities since 2009 and I finally took the cotton out of my ears, put it in my mouth and started to listen. I’ve met some incredibly powerful spiritual people along the way and they have taught me what spirituality really is all about and that is having a relationship with myself first so that I can have relationships with other people.”

Perhaps what is most amazing about Fleury’s story is aside from all the emotional challenges he faced growing up, are the physical challenges he also faced in getting to the NHL.

At 5’6” and 150 pounds, he is one of the smallest players ever to play professional hockey and no player of this size has ever dominated the sport as Fleury did during his prime.

When comparing today’s NHL to his era, he says he has no doubts as to which period is tougher for a player to break into.

“I was playing against guys that were 100 pounds heavier than I was. We were breaking sticks over each other’s backs and arms and no penalties. It’s funny, when we have a Connor McDavid (2015 NHL first overall draft pick) come on the scene it’s like a monumental thing. But when I was playing there were 60 Connor McDavids playing in the NHL. So what does that tell you?”

Playing With Fire: The Theo Fleury Story played from January 13-31 at the Persephone Theatre in Saskatoon.