Games renamed in honour of celebrated veteran and Elder

The Saskatchewan First Nations Summer Games wrapped up the week-long event with the closing ceremonies held at the First Nations University of Canada (FNUniv) Cultural Village main stage. It was then that the host File Hills Qu’Appelle Tribal Council (FHQTC) summer games committee, along with the Federation of Sovereign Indigenous Nations (FSIN), announced the renaming of the summer and winter games to honour an elder and Korean war veteran, who founded the sporting event back in 1974. 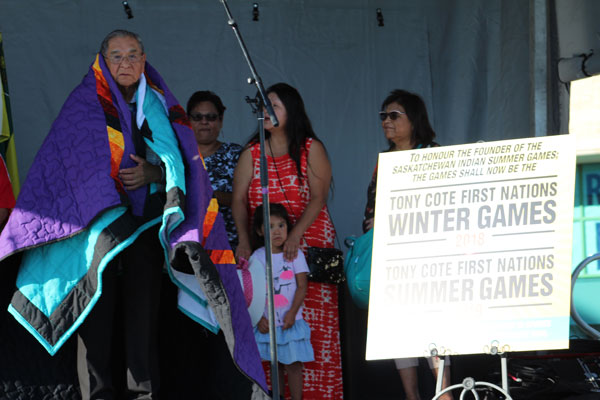 "Tony Cote had a vision with his other comrades,” Chief Bear said. “Forty-three years ago they succeeded in having the first Saskatchewan Indian Summer Games.”

Cote was surrounded with his family at the announcement to witness a moment that will go down in history.

"I’m very proud of it...they will always be mentioning my name,” he said. “At least I’ll be known for awhile anyway.”

Cote said over the years young athletes approached to thank him for initiating the games. He added that organizing the summer games was to try get the young Indigenous people to participate. When the summer games first started, Cote said there were only 500 athletes and now the numbers increased tremendously to over 3000 athletes.

The overall summer games champions this year is Meadow Lake Tribal Council (MLTC) earning 958 points taking home 20 gold, 19 silver and 20 bronze medals. Team Yorkton Tribal Council (YTC) won the Tony Cote Award which is an award given to a team or tribal council that demonstrated the most improvement.

The current champions MLTC will be hosting the next summer games in 2018.