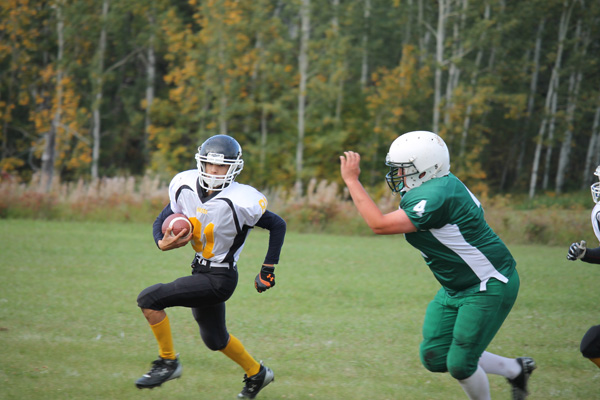 Northern Saskatchewan Football has had a fantastic third week of action.

On Monday, September 14 the unbeaten Green Lake Spirits demonstrated their strength and speed at home, by shutting out the defending Western Division champions Pinehouse Lakers by a score of 36-0. Braedy Sinclair added to his league leading 10th and 11th touchdowns to pace the hometown squad,  before sustaining a shoulder injury in the second half. Braedy will miss the final game of the season but will be able to return for the playoffs.

On Tuesday, September 15 the travelling Beauval Voyageurs also remained unbeaten with a 14-6 victory against the Buffalo Narrows Eagles. This was a tight defensive game from start to finish, with Walter Hood scoring two touchdowns in the game to pace the Voyageurs.

On Thursday, September 17 the La Ronge Chargers travelled across town to the Lac La Ronge Indian Band to take on the Senator Myles Venne Huskies. La Ronge played a strong game shutting out the Huskies by a score of 44-0. Scoring details were unavailable at press time.

On Friday, September 18, the Cumberland House Islanders travelled over 700 kilometers to Sandy Bay. Prior to the game, the hometown T-Wolves dedicated the game to former quarterback Michael Bear Custer who passed away in the off season. Local elders drummed and sang in memory of Michael with additional performances at half time. The game itself was all Cumberland House, as they extended their record to 3-0 with a 72-12 victory over the home team. Both Brandon Fiddler and Bailey Carriere scored three touchdowns for Cumberland.

Looking ahead at week four of Northern Saskatchewan Football action, two games will feature unbeaten teams. The Green Lake Spirits will travel to Beauval on Tuesday. On Wednesday, Buffalo Narrows Eagles will host the La Loche Lakers. On Thursday, the Sandy Bay T-Wolves travel to La Ronge to take on the Chargers. Rounding out the week, the Cumberland House Islanders host the Creighton Kodiaks in the other battle between unbeaten teams. Both Green Lake and Cumberland House may finish the season with perfect 4-0 seasons, resulting in the point differential between the teams to determine the higher ranking of 1A teams.