Gurski girls have a good month! 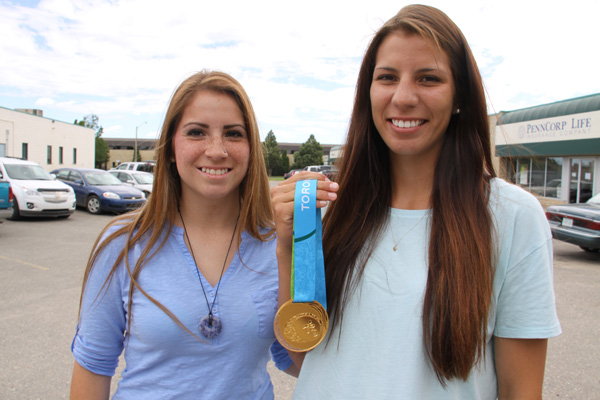 On the left is Rebecca Gurski, 20 years old and a back catcher for the Saskatoon Tigers softball team and they won Gold at the provincials. On the right is Megan Gurski, 21 years old. Megan returned home to Saskatoon Monday from the Pan AM Games after her softball team won the Gold defeating the United States 4-1. The sisters are members of Yellow Quill First Nation.

Sisters Megan and Rebecca Gurski have had a heck of a month. The avid softball players both won championships making their home community of Yellow Quill First Nation very proud.

Megan was a member of Team Canada at the Pan Am Games recently held in Toronto. There, Megan played in front of the loudest fans she has ever heard as they helped Team Canada to Gold in Softball over the United States. “The home crowd was awesome and sold out. They were cheering all the time and just awesome. They were very enthusiastic,” said Megan who was one of the youngest on the team and the only Aboriginal player. Megan was a pitcher in college but for the Pan Am Games was the designated hitter who took the at bats for the pitchers.

Her soft ball career has taken her around the world and to events like the Canadian Open and the World Cup but this victory is tops so far. “The ultimate was winning gold. At the last out we were so excited we just ran out onto the field. It was an amazing feeling. We were all screaming and there were girls crying.”

Rebecca won herself a championship this month too. As back catcher for the Saskatoon Tigers, Rebecca caught six games in three days to help her team win the Provincial title. But she doesn’t want to stop there. “I’m tired and sore but that’s how it goes. My goal is to someday play on Team Canada with my sister so I just have to keep working at it,” added Rebecca.

The love of soft ball was passed on to the girls from their parents who played and the family life revolves around ball and the travel that comes with it. “I love the travel. You get to play around the world.  We went to watch Megan play in the Czech Republic and we’ve been to the States and BC. You get to see a lot,” added Rebecca.

Megan now starts her job as an interior designer and hopes for soft ball to get back into the Olympics by 2020. “I hope I can stick around that long,” says the humble star. In the meantime, her and her sister offer advice for those that want to excel in sport. “Of course you have to work hard at your game, but put family first, then academics then your sport. If you aren’t doing well at school you can’t play ball.”