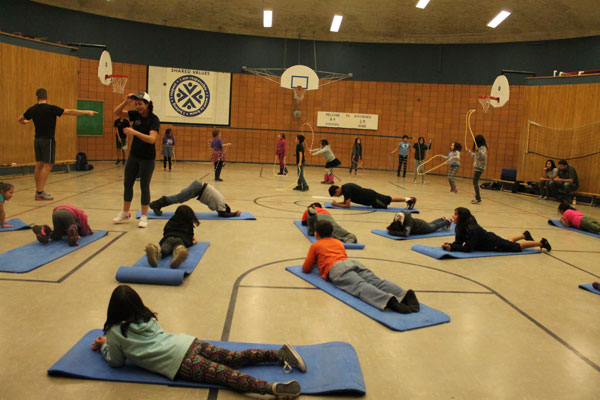 Children sit in a circle on the gym floor, happily chattering amongst themselves, while they eagerly wait for the activities to start.

“When we first come in, we come together in a circle, have a snack and then share each other’s stories,” said Tanis Keepness, one of the high school mentors.

In this program, they have five youth mentors who all attended the school before heading off to high school: Royce Taniskishayinew, 15; Tanis Keepness, 17; Cole Keepness, 15; Rochelle Taniskishayinew, 17; and Jessica James, as well as two junior mentors, Macy Stonechild and Katreena Landry who still attend Kitchener school.

Jessica James had started as a mentor in the program the moment it started and Lewis good-humouredly calls her the veteran.

“I heard it from my mom and was asked if I wanted to join and I said yes because I like working with kids. It’s something I want to do, and I can come here and work with kids so I agreed,” said James. 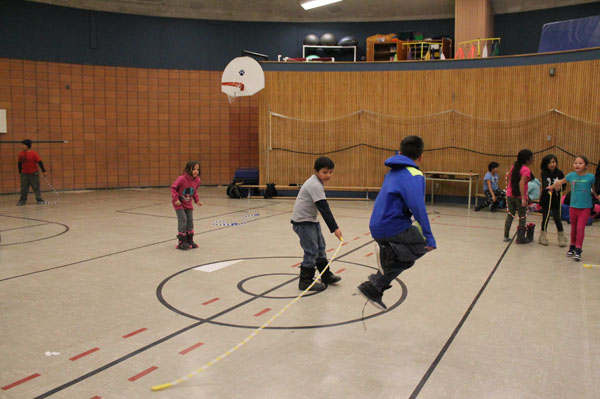 The other youth mentors gradually joined in a year later and are role models for the younger children.

Cole Keepness says they have learned a lot and it is fun working with the kids.

“We were asked to join and help out when they went on outings at first and it later became a regular thing. They ended up hiring us,” said Keepness.

Tanis Keepness agrees that it has been good for them as it is for the children.

“We want to set a good example for the younger kids and we have little brothers and sister, so we want to be good examples for them, too,” said Tanis Keepness.

Lewis claims they are downplaying the role they play as they are very instrumental in the program.

“Not only do they help, but these little ones see them committing to something, see them always showing up,” said Lewis.

Lessard, Schaefer and Lewis knew they wanted to create a program in a place where there was a strong sense of community.

“All we really wanted is to be connected to a community, to work alongside them,” said Lewis.

They plan to keep the program as long as they can and even when the funding runs out Lewis asserts that he will continue to keep going.

“It shows consistency, there are a lot of times where people come in for a short time and they’re gone. If we just came in for a short while, we couldn’t build these relationships” Said Lewis.

When asked what the most memorable thing that has happened to them in the program, Royce Taniskishayinew answers,

“Nice Glasses and laughs as he explains of the compliment he received from a kid when he first started the program.

They all have developed these special memories and a big brother/sister, little brother/ sister relationships.

“This one little girl always asks me, how my day is going. I tell her and it just makes my day,” said Rochelle Taniskishayinew.

Cole Keepness smiles as he shares one of his stories on his relationship with one little boy.

“Sometimes he would be annoying to me, other times he we will be acting like were best friends, and be like hey bro,” Keepness said.

The children are able to talk to their mentors if there is something bothering them.

Lewis says it is all intergenerational and it causes a ripple effect.

“I learn from the little six year olds, they learn from me. It’s not about the older ones teaching the younger ones, were all teaching each other,’” said Lewis.

The Growing Young Movers program meets every Wednesday after school from 3:30 to 5:30 pm.  Many of the activities occur in the gymnasium of Kitchener Community School though at times they are able to take field trips in the city.