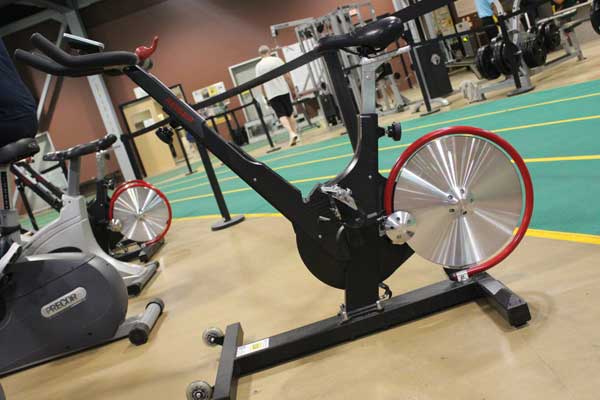 Healthy living and community giving is the mission for the co-owners of Ryde YXE in Saskatoon.

“I grew up participating in all kinds of different sports and activities and I pursued them all the way to playing university basketball,” said Shaina Lynden of Ryde YXE.

The Saskatoon police officer and a member of the Yellow Quill First Nation is one of the co-owners of the gym. Ryde YXE specializes in stationary bicycle – also known as spin classes, an intense form of interactive workout that has grown in popularity in recent years.

“I obtained a kinesiology Bachelor of Science degree and tucked it in my back pocket for a little, while I pursued policing as a career and kind of full circle came back to it,” she said.

Physical activity was always of interest to the other co-owner, Bradie Mustoe, as well.

“I had grown up here dancing – ballet, jazz – so that’s what I had pursued the first while after high school,” said Mustoe.

When Lynden first had the idea to open Ryde YXE, she was 10 years into her law enforcement career and was looking for something else out of life, but stayed with her policing job.

A chance encounter with former NHL player and well-known children’s advocate, Sheldon Kennedy, at a spin class in Calgary, gave her the idea to open a gym.

“Sheldon was there because he needed and wanted to be there,” Lynden said. He said spin was his outlet to deal with daily life. That resonated with Lynden and she felt there could be an opportunity to support the community of Saskatoon.

Meanwhile, Mustoe was living in the United Kingdom but was thinking about moving back, so Lynden approached her childhood friend with her business idea.

Mustoe was interested and the pair started looking into how to open Ryde YXE.

They opened on Broadway Avenue in Saskatoon.

Ryde YXE became so popular that two years ago, they opened their second location in the City Park area.

To give back to the community, Lynden and Mustoe instituted Friday night ‘Ryde For Change’ classes.

The $10 class fees all go to a charity, which changes from week to week.

“If it was just a regular class, you might not come in to get your workout in at 7:15 on a Friday night,” Lynden said. “But, if we made it special and made it an opportunity to give back to the community in different ways, we thought it would be a great way to bring people together.”

Charities can apply to be recipients at rydeyxe.ca.

Shawna Naduriak, a Licensed Practical Nurse, has been going there since 2016.

“You share in that experience with people and you are more inclined to stick with it,” said Lynden. “So, I think you choose something that not only are you interested in but are prepared to try something new to come with friends and to build a support group.”