The Montreal Canadiens Alumni Hockey Tour made an exciting stop at the Lac La Ronge Indian Band’s Jonas Roberts Memorial Community Centre (JRMCC) on Saturday, November 28, 2015 as they faced off against the La Ronge 89er Selects before more than 400 spectators.

Coached by Habs legend, Guy Lafleur, Chabot and Stephane Richer were among the 10 players on the Alumni team who were joined by two locals, Dean Senga and Devin Bernatchez.

“It was a dream come true,” said Bernatchez, who has been a Montreal Canadiens fan for as long as he can remember, and idolized Richer as a kid. “It took me back to my younger days playing road hockey on Dalby Crescent. When I scored a goal, I was Stephane Richer.”

Playing forward, Bernatchez scored two goals when he donned the Canadiens jersey, and assisted on two others.

“To play with them is something I will cherish forever,” said the former La Ronge Ice Wolves player.

As a minor hockey coach for the last decade, Bernatchez was pleased that proceeds from the event are going to support youth sports, and gives full credit to the organizers for all their efforts.

Plans to bring the tour to La Ronge began back in the summer, said Kevin Roberts, JRMCC’s Director of Sports and Recreation.

“Through emails and phone calls, we were able to nail down a date that worked for our schedule and theirs,” he said.

The Saskatchewan portion of the Alumni tour also included games in Yorkton and Unity. To make the La Ronge experience unique, Roberts said they arranged for a traditional meal that included fish, moose meat and bannock. The supper was part of a VIP event where fans could meet and greet their idols, get autographs, and pose for photos. 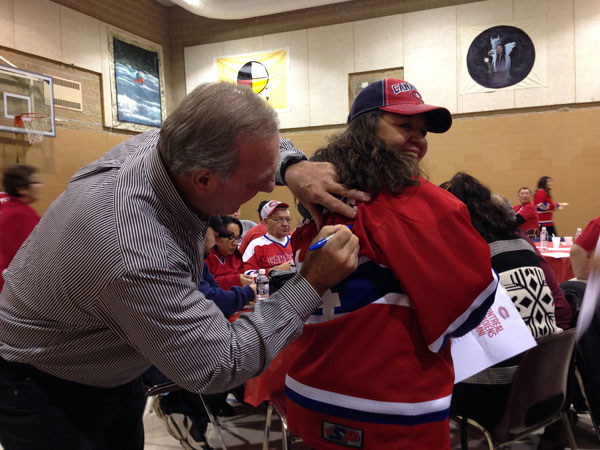 An excited Shirley McLeod gets her Canadiens jersey autographed by Habs legend Guy Lafleur. McLeod was also excited that her brother, Devin Bernatchez, got to play on the same team as his idols. Photo by Linda Mikolayenko

The Selects team was put together especially for the occasion, made up of 12 guys who couldn’t pass up the opportunity for a once-in-a-lifetime experience, and though the score was 12-4 in favour of the Alumni, it didn’t seem to matter.

Although a huge hockey fan himself, Kevin Roberts said his responsibilities that evening didn’t allow him to lace up his skates, but he enjoyed the camaraderie with the Montreal Alumni team.

“The guys were great!” he said.

In a generous gesture, during the first intermission, the Alumni team also played a five-minute game with the youngest players in JRMCC minor hockey program, the IP 89er pre-novice team.

“For some of them, it was their first hockey experience,” said Roberts, “so that was a big boost to them to continue to stay involved.”

While the La Ronge players were left with dreams realized and great memories, the Montreal Canadiens Alumni left La Ronge with special mementos of the evening.

Gary Parada, who played goal for the 89er Selects, presented each of them with dream catchers featuring the Canadiens logo.